Appointments were kept, groceries were taken on, wreathes also; vegetables were chopped and put into the freezer; cats were beguiled with the flying mouse; bills were paid, and banking was done.

Had a dash of Incredible Luck at the grocery store’s book bin.  Somebody had thrown in six brand-new Peter Wimsey novels (Clouds of Witnesses, Unnatural Death, the Unpleasantness at the Bellona Club, Strong Poison, Five Red Herrings, Gaudy Night, for those keeping score at home), which I snatched up for a buck-a-book donation.  These will replace the Wimsey books winnowed from Baltimore-area used bookstores back in the mid-and-late-1980s, which are pretty much falling apart.  In fact, I believe that one title — Have His Carcasse — may have already met that fate, falling apart in a time where Sayers was out of print.

Now, of course, I have a Problem Before Me.  Do I buy brand-new replacement copies of the other books in the set (and replace …Carcasse)?  Or is that just too. . .too?

In other news, we receive advance word that OVO will be at the Bangor Cross Center June 2-5, 2016.  I was rushing off to buy tickets when Steve mentioned that we not be home from BaltiCon yet.  Right.  Next year, we have some traveling inked in.  Must remember that.

No words today, what with one thing and another thing.  Tomorrow, I have an early appointment with the HR Nurse for the hospital, and possibly a visit to the vampyres, after which I have nothing but writing on the calendar for the rest of the week.

Hope everyone has had a pleasant beginning to the week.

Writer at work, with attendant muses: 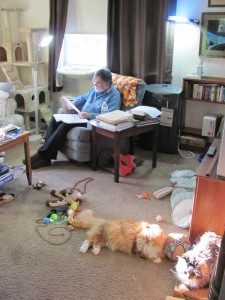