Theo Waitley has a lot of fans, and they write to us from time to time, politely pointing out that it’s been, like, forever (or 2012, whichever comes first) since the latest installment of her story, and they wonder when the next Theo book will finally gladden their lives.

Sadly, because of how we write (organically, say some; chaotically, say others), we have not been able to answer this seemingly simple question.

Now, we can say, with authority, that Theo will play a large part in The Gathering Edge, the 20th novel in the Liaden Universe®.  We’ve known this for a number of months, and I apologize for not saying so sooner, but, um, I’d forgotten it was an issue until, providentially, someone wrote to me, wondering when we were going to get around to continuing Theo’s story, and I realized that this was a topic Of Interest to Many.

So, yes — The Gathering Edge.  Theo.  Also the Uncle, Miri and Val Con, and — oh, a number of folks, some of whom you won’t meet until Alliance of Equals, which is kind of the bad news here.

See, Alliance of Equals is the 19th novel in the Liaden Universe®, and it’s not a Theo novel.  It’s a Shan novel, sort of — possibly a Padi novel more than a Shan, but in that range.  It, too, features the Uncle, and those folks you haven’t met yet, and it?

We’re writing The Gathering Edge now — in fact, we just cracked 50,000 words (or passed the Theoretical Halfway Point, which sounds a little more encouraging, though its unlikely to be True) of the first-draft-and-a-half yesterday.  The final manuscript is due on Madame the Editor’s desk in mid-February, 2016.

So, while there’s a Theo novel on the road to publication — yay! — you’ve gotta use binoculars to see it.

I am not going to predict when Edge will be published.  Every time I produce my best guess for a date, Madame surprises me, so we’ll  just say — publication is expected after July 2016.

For the FB peeps, a rare photo of Scrabble, who, unfortunately, had her forcefield engaged: 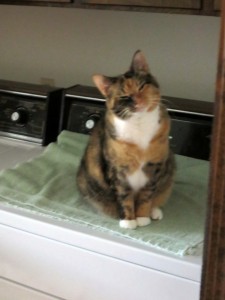 8 thoughts on “PSA: The next Theo novel”