This was not the day I had planned.

I had planned to do some business emails, then get with the manuscript, and finish the squaring up of the Big Narrative Lump, and indeed, the day went agreeably in that direction for about two hours.  Then, I noticed that Belle’s back foot was bleeding.  Steve and I did an examination, and determined that, yes, this was a matter for the vet, so we called, and achieved an appointment for 2:30 today.

After that, it was my turn to call The Guy From Dead River (for those coming in late, the whole house generator was installed yesterday, so yay!  However, the generator needs propane to operate, and, as reported earlier, siting the propane tanks was apparently going to be A Big Problem).  This would have been, you understand, on the order of the sixth phone call we’d made to the office since the site visit.

I actually reached someone who could help me.  She informed me that this project was going to be Very, Very Difficult, involving two guys for six hours and a ditch witch, it was going to cost A Bundle of Money, and! — insult to injury — the work can’t be done until November 16.  At 8 a.m., naturally enough.

This is the point where you’d walk away and call the next vendor on the list. Sadly, there is no next vendor, so I agreed to Terms, and ask you please to all join me in hoping that the damned ground doesn’t freeze before November 16.

I did a little more work, Steve made us a lemon and chicken soup for lunch, and at precisely 2:30, we were at the vet’s, who was saying, “Good grief, what happened?”

The vet cleaned the wound, prescribed antibiotics (because Belle weighs very nearly 17 pounds, Belle gets to take Dog Drugs, which is to say 1/4 of a dog-sized antibiotic), and sent us on our way with instructions to watch the foot, and Belle’s behavior, and call if anything changed for the worst.

I will note that Belle was a perfect lady on the ride to and from, and at the vet’s.  Though her foot must have hurt a lot, she didn’t utter a single curse, nor tried to discipline the doctor or her assistant.  I expect Maine coons to be mellow, but this was really above and beyond.

Home again, I did the dishes, and got back to work for another hour.  My concentration, however, is not what it ought to be going into this section, which needs a bunch of description, and is also somewhat scrambled on the Who Said What To Whom front.  Which is to say, the kind of stuff you need to bear down and micro-concentrate on.

So! That will be Saturday’s job, since tomorrow, day-time, is filled with appointments, and that evening with the Rocky Horror Show.

In other news, I have been remiss in reporting the anniversary of our 27th year in Maine.  We crossed the border on, I believe, October 3, 1988, and commenced an exciting day, indeed, in which we found in short order that we had no place to live (because the daughter of the owner of the house in Skowhegan we had rented long-distance, had left her husband in the time it had taken us to drive from Maryland to Maine, and moved into “our” house); Steve’s job, also arranged long-distance, had evaporated; that the Skowhegan library had on its bookshelves in 1988, SFBC editions of books that hadn’t gone out since 1977, and the librarian of same advised me, earnestly, that, if I was a reader, I should go to the high school library to borrow books.

Yes, it was epic, that day; one of the Great Ones that you look back upon in calmer times and wonder how you had held your hand from murder and mayhem.

Still on topic — in another three weeks, Steve and I will be celebrating the 35th anniversary of our marriage.  We moved to Maine together, where we knew no one, save Tom Easton and Barry Longyear, through SFWA, when we had been married less than eight years.  In retrospect, I’m not sure if that was heroic or stupid.

Whichever, it turned out all right in the end.

Yesterday, I did go elsewhere to work, and got a bunch of redlining done on the threads which are not the Big Narrative Piece.  In the morning, since it was sunny, and windless, I went out to Oakland, and worked at a picnic bench at the Messalonskee Lake Public Boat Landing.  I was wearing good Maine layers — long-sleeve tshirt, long-sleeve denim shirt, long-sleeve fleece hoodie, jeans, and wool socks — and it was actually quite pleasant for a couple hours, until the wind picked up.  Later in the afternoon, I moved my base of operations to China Lake, where I lunched, and worked in the car.

Today’s blog post is brought to you by Bob Dylan by way of Tom Russell, “Lily, Rosemary, and the Jack of Hearts.”  Here’s your link.

Here’s a shot of yesterday’s temp office at Messalonskee Lake: 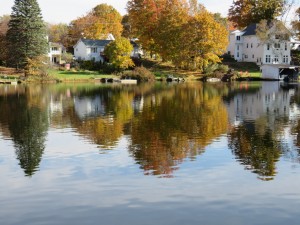