. . .a long, long time ago, my grandmother asked me what I wanted for my birthday.  I said that I wanted a pair of embroidery scissors shaped like a crane that I’d seen in a magazine.  My grandmother approved of the fact that I embroidered, so we got on the bus and went downtown to a certain cutlery shop known to her, and there, in the case, were my scissors.

“You pay for it,” she told me, “since they’re your scissors.  If I gave them to you, they would cut our relationship.”

So, I bought my scissors, and gave the change from the transaction back to my grandmother, and we proceeded downtown to McCrory’s, where we had ice cream sundaes in celebration of my twelfth birthday.

This evening, I needed to sew buttons on a shirt, so I got out the sewing box and rummaged through until I found a spool of matching thread.  It was only after I had threaded the needle that I realized the spool was wooden.  Here it is: 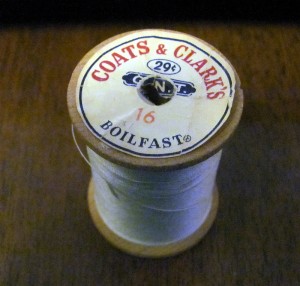 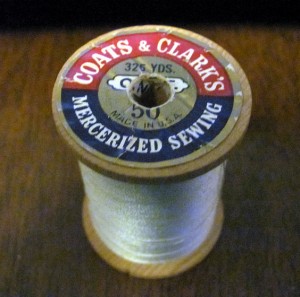 In other news, it was hot today, for Maine values of hot, which meant windows filled with coon cats.

6 thoughts on “Appropos of nothing much”