(Apologies to those who have seen this before.  This is a repost in order to see if the Magic of the Internet is on the case.)

We have, through the kind offices of Tony Daniel and Danielle Turner at Baen, the following Sneak Peak of the cover art for Carousel Sun by Sharon Lee, which is tentatively slated for publication in early 2014. 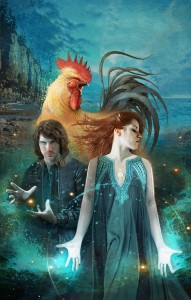 For those coming in late, Carousel Sun is the sequel to Carousel Tides, by Sharon Lee — available even now at a bookstore near you; in all ebook formats known to man from Baen, from the Kindle Store, and the Apple ebook store.  It is also available as an audiobook from Audible.  I’m writing the last book in the trilogy — Carousel Seas — as we speak.

Please note that the Carousel books are not (that’s not) Liaden Universe® novels; they take place in an almost-real town on the coast of Maine, and they are fantasy.