Today, Mozart goes to the hairdresser for his summer do. It’s a little early, but Mozart had obviously planned for a Cold Maine Winter, Just Like Grandpa Used to Have. I think he fails to understand that Grandpa tended to exaggerate when he was into the nip. 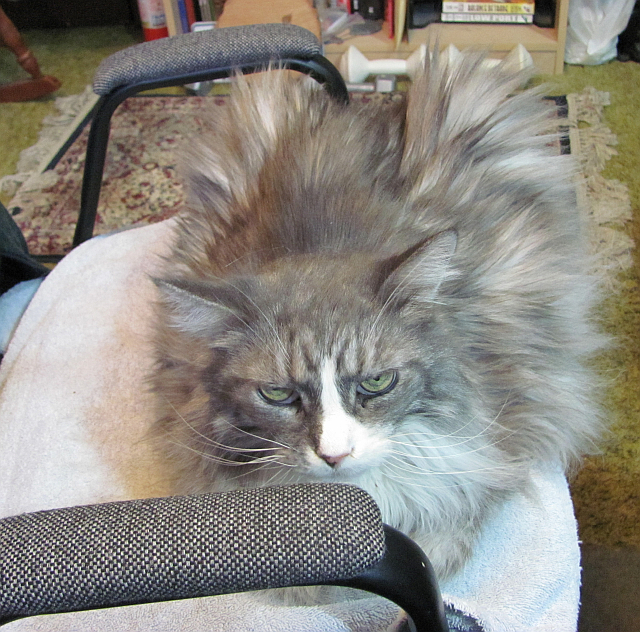 I’m sure he’ll be just as annoyed in the After shot.

So, first thing is hairdresser.  Then back to the house to cook and eat supper; the chicken already marinating because I am mighty!;  then out in the opposite direction to ransom the income taxes from the accountant.  Then back home, to check over the paperwork and doubtless to write checks to the IRS and the Treasurer of the State of Maine.  Possibly I’ll get some writing done, if no more chores or errands mount up while I’m slaying the ones already in-queue.

Speaking of checks — several kind people sent money via the Splinter Universe PayPal button, to help with the repair of my car.  Thank you so very much; I’m surprised, but grateful.

I did yesterday get to the library for a writing shift, after picking said car up from the garage, which was good.  I’m liking this  getting out to a new room; varying from the Same Old seems to be sharpening up the writer brain.  The writing goal is 2,000 words a day on Carousel Seas.  The plan is to get to the point where I can juggle one ball, and then add in another for later in the day.  This may or may not work, but if you don’t try, you never learn.

And I see by the clock on the wall that it’s time to find a cat and insert him into a cat carrier.

“Kate,” I said, bending over to pick up the Journal-Trib, “you lack vision.”