NOTE: No authors were injured in the production of this day’s adventures. 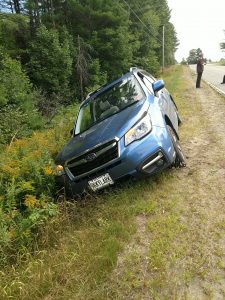 But, before that, Steve and I had decided to take a Day Off, go to Augusta to tour the Gem and Mineral Show, go for a ride, have a nice dinner at a nice restaurant, and an evening off, playing Scrabble, or watching a movie, or. . .

In Keeping with This Plan, we arrived at the Gem Show a few minutes after they opened the doors at 10:00, split up and toured the offerings.  I bought a piece of rutilated fluorite, and a couple of small swirl-glass eggs that will be introduced into my jar of marbles.  My Big Adventure of the show was, after I’d been messing around with the raw opal (displayed in a tub of water), I shook the water from my hand, walked around the end of the table, and there encountered a tub of amethyst and blue tourmaline chips.  I ran my fingers through them, as one does, brought it up, and said, in distress, “Oh, no!”

The vendor dashed over to me — “What’s wrong?” — and I showed her my hand, covered in gem-chips, like some steampunk glove, explaining that I’d been looking at the opals immediately previously, and she shook her head apologetically.  “We really ought to put a roll of paper towels over there.  You are not the first person this has happened to.”  I nodded, scraped gem-chips off my hand, and eventually moved on.

After we left the gem show, we commenced on our ride, out to Belgrade, where we stopped at an antiques/art shop, where we did not buy a lawn cannon; out toward Farmington, over the Strong Road, moving through Starks and crossing over into Anson.

Now, the thing about this drive was that — we were on our day off, on the Saturday of a long holiday weekend, and Steve was driving the speed limit, being under no necessity to hurry.  This relaxed state did not apply to the persons behind us, and just as we crossed from Starks into Anson, Steve pulled over onto the shoulder to free the folks pushing us to their necessities.

This would have been a Good Plan, save for one thing — the asphalt edge of the road crumbled as Steve pulled Skylark the Subaru off; the right tires became mired in very loose sand, and, long story short, we slid into the ditch, though not quite over into the ditch, with the two left wheels dug into the level sand sort-of at road level, the back rear wheel resting on the side of the ditch, and the right front tire — hanging in space.

With difficulty, Steve pushed his way out of the door, which was more over his head than it was level with his shoulder.  I climbed over the stick by hanging onto the steering wheel for dear life, convinced the car was going to go the rest of the way over, and frantic to get out before it did.

I say here that I did the car wrong.  It rocked, but it never rolled the rest of the way over; it just sat there, patiently balanced in space for the two-and-a-half hours it took for help to arrive.

Now. . .here is why we live in Maine.  Every car that passed us stopped to make sure that we were all right, and that we had called for a wrecker.  Eventually, an Anson Volunteer Fireman, Kelly, stopped and kept with us the whole time, directing traffic around us, and making sure no one else attempted to pull over onto that stupid sandy shoulder.

Now, the sad part.  Triple A.  I have been a member of Triple A for 42 years, and this was by far the worst experience I have ever had with them.  First, the person on the help line couldn’t find Anson, Maine on her “map.”  She could find Farmington — 20 miles behind us.  She took leave to doubt that there was a town called Anson, so I finally gave her to Steve in frustration.  He was able to insist hard enough on our location that she was finally able to find it on a map, though she continued to say that a wrecker would have to be sent from Farmington.

This was when Kelly stepped up with the information that there was, just a few miles away in Madison, a Triple A certified garage.  He got on the phone and gave the dispatcher the information. She confirmed that she had called that facility and that a truck was on the way, arrival time about 2:00 — 45 minutes in the future.

We settled down to wait, chatting with Kelly, and with the cars and trucks that continued to pull up and ask if we needed help, and the other cars that pulled with offers of using their onboard chains to drag us out.

It was kind of like a mini-convention, there in the middle of Route 43 East, and in this manner it got to be 2:00, then 2:15, then a text message arrived from Triple A stating that the wrecker would be along about 3:30.

I called Triple A back.  Triple A told me that it was a holiday weekend, that they had called our preferred service, but no one had answered, and they had sent the job to the big company in Skowhegan, which was right out straight, and if my car was in such a precarious place, then I had better contact the “local emergency personnel.”

Well, it so happened that we had a member of the “local emergency personnel” standing right there with us in the road, and he took it to the next level.  He called our preferred wrecker service on the boss’s private cellphone; he called his fire station for a senior to come over and evaluate the situation, and could the fire truck maybe pull us out; he called the Sheriff’s Office to have a deputy come by and make a report, in case the car was discovered to have taken damage after it was pulled out, and we needed to file a claim with the insurance company.

The guy who owned the wrecker service had been at a barbecue; Triple A’s call had gone direct to voicemail without his knowledge.  He sent a truck, “with Damien.”  The senior volunteer fireman arrived, surveyed the situation and gave it as his opinion that the wrecker, now on its way, could do the job; no need to get fire equipment involved; and the deputy sheriff was on his way.

Wrecker and deputy arrived around the same time.  Damien crawled around under the precariously balanced car, attaching chains.  The deputy got in the car, put it in neutral, and helped guide it out of the ditch and up onto the flatbed when the winches started.

From start to finish, that part of the operation took 15 minutes at the outside.

Questioned, Damien admitted that the operation had been “hairy,” and added that he’d pulled dozens of cars out of “that ditch,” though mostly in winter.  The deputy took our information and will be making a report, but!  Skylark the Subaru took no damage.  It drives fine; the paint didn’t even get scratched.

Thanks were said all around, and we drove — carefully — back to Waterville, where we stopped at Colonel Sanders for take-out — close calls calling for salt, as they do — and brought it home so we could eat it over a glass or two of wine.

And that’s what we did on our writers’ day off.

Tomorrow and Monday are writing days.  Tuesday, the cats are having in a contractor. . .and from Wednesday on is clear for writing, as well.

Everybody. . .stay healthy.  And watch out for soft shoulders.

3 thoughts on “Writers’ Day Off”