So, I get back spasms that are really painful.  Not often, but when they come around, it’s really useful to have muscle relaxants on hand.  Which, I did, on Friday evening, when this latest bout started.  Saturday, I took more, which was, just by the way, like dropping ice cubes, one by one, down the throat of Kilauea, and I realized that I was getting kind of low, but!  No worries, really, because I had enough to get me through Sunday and on Monday, I would go see my doctor. (Dangers of The Freelance Life, Number 612: You Often Lose Track of Holidays.)

When I realized that Monday was, in fact, a holiday, I called my doctor’s office, got a phone number of an on-call doctor, from her very scratchy answering machine, and called it.  The number turned out to be the number for the local hospital, who put me in touch with a nurse practitioner, who called me back, heard my plea for a prescription for enough of these pills to see me through until Tuesday, when I would go see my own doctor.  She agreed to send in the prescription.

When the pharmacy hadn’t called in three hours, I called it — no prescription in my name was waiting.  I called the hospital back; they contacted the nurse practitioner, who promised again to send in the ‘script.  No dice.  At 5 pm, I once more called the hospital, the nurse practitioner called me back, said that there was a possibility that the prescription had gone to the Walmart pharmacy in Skowhegan, or may it just hadn’t gone through at all, but in any case, she was really sorry that I didn’t have my meds.

After a Very Bad Night that lasted approximately three years, it was Sunday.  Again, I called the pharmacies — including the Walmart Pharmacy in Skowhegan — but there were no prescriptions for me at any of them.  So, I called the hospital one! more! and they put me in touch with a Whole ‘Nother Doctor, who promised to call in a prescription for “just enough” medicine to get me to Tuesday morning.

Which, he didn’t do.

I took my last pill yesterday morning.  My back still hurt, so, Shan-like, I carried a glass of the red with me for the rest of the day, sipping as needed.

Last night was somewhat better; lasting two years, and while my back hurt when I got up, I find that as long as I stand up, there’s no pain today.

In the meantime, Other Matters have been clarified.  A morning call to my doctor’s office got me the scratchy tape once more, and I was able to understand that its news was that the office is closed until September 10, next Monday, which is. . .just. . .peachy.  I can, says the helpful nurse at the Walk-In Clinic in Waterville, go to them for an evaluation, but there’s no guarantee that the practitioner who sees me will prescribe the drug I’ve been taking, or any drug at all.

Basically, my choices at the moment are:  go to the clinic, now that the worst is over, and waste their time (and mine, now that I’ve lost an entire weekend to this crap), or simply decide that the worst IS over, and go see my doctor on September 10, hoping that she’ll renew the prescription for the muscle relaxants so I can have them with me during the carousel convention (which is important, because, lemme tell ya, getting on and off of carousel horses is hard on your back).

To recap:  It has been a very frustrating and unproductive holiday weekend, here at the Cat Farm and Confusion Factory.  Hoping yours was better.

I am remiss in reporting here that Scrabble’s 16th birthday, observed, fell on Saturday.  Here’s a picture of the birthday girl: 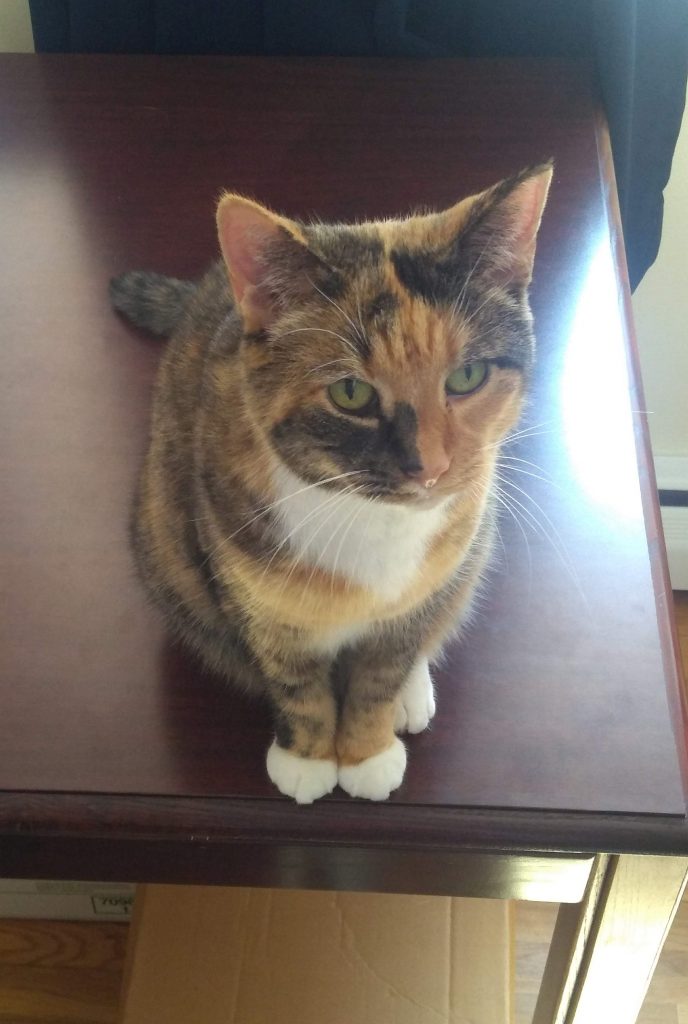