So, the new neighborhood continues to be amusing.  Yesterday, on my way to the mailbox, I was stopped by a friendly woman, who turned out to be the wife of one of our candidates for House District 109.  Of course, she wanted me to vote for her husband, and gave me the literature and the story, all very succinct and pleasant.  At one point, she turned to survey the house, and her eye caught on the CAT magnet we have on the car, and she turned back with a smile.  “Cat,” she said.  “We’re definitely your candidate.”  The conversation then turned to the neighborhood — she’d lived in the house next door for a couple years when she was a kid — and the state of downtown.  We found, not surprisingly, several mutual acquaintances, and by the time her husband arrived, and I got to shake hands with him, and was released to gather the mail, and come back inside, where Steve said, “Who were they?”  I handed him the literature, and said, “The guy I had already decided to vote for.”

Also yesterday, earlier in the day, I installed a bird bath, renewed the Hummer Bar, and then took a tour of the back yard, trying to figure out the various flowers, bushes and trees, and take inventory of which needed dead branches cut out, and what beds needed thinning — as one does.  I am pleased to report that there are at least three rosebushes in the backyard, tucked away into surprising little nooks.  They all appear to be domestic roses (as opposed to sea roses, for which I have a really unseemly passion), and I await news of their color and style.

My tour took me down past the shed, and ’round to the forest gate, which opens onto the trail/road maintained by the sewage district.  I did not on this occasion venture further, though I’m told that, if I follow the sewage district’s greeny road, I will eventually come into the network of trails maintained by Thomas College.  Also, if I like to fish, there are apparently several off-trails that go down to the rivers.  Actually, the trails are there whether I like to fish or not, which I fear that I do not.

Eventually I wandered back into the house, sat down at my desk, and glanced out over the yard — just in time to see a fox dart out from the tangle-growth at the side of the yard.  Running full speed, he slammed into a squirrel who had been rootling around in the grass, grabbed it and kept on running, down to the bottom of the yard, and out the forest gate.

Trooper, who had been lounging on the back of the desk, looking out the window, sat up with a Completely Astonished Look on his face — Good Ghod, there are predators in the yard! I think the expression on my face was its mirror.  Who knew the city was so wild?

For those keeping score, this house has a Goblin Room, and a Forest Gate.  Also, a yard fox.  Yes, we’re living in an urban fantasy novel.

Accepting the Lance broke 10,000 words last night, so that’s moving along at a rational pace.

This morning, Steve made us pancakes for breakfast, which we had with strawberries and maple syrup, mmmm.  After I finish my second cup of tea, and this blog post, my morning will be about mopping floors and cleaning bathrooms, because I haven’t yet gotten my act together to find a cleaning service (the little voice in my head, the one that says, O, Rly?  You can’t take care of your own house?  Aren’t you SPESHSCUL. — is NOT helpful.  Just sayin’.)

After chores, then to work, and so into the new week.

Everybody have fun, ‘k?  And don’t forget to take some time to sit and look out the window. 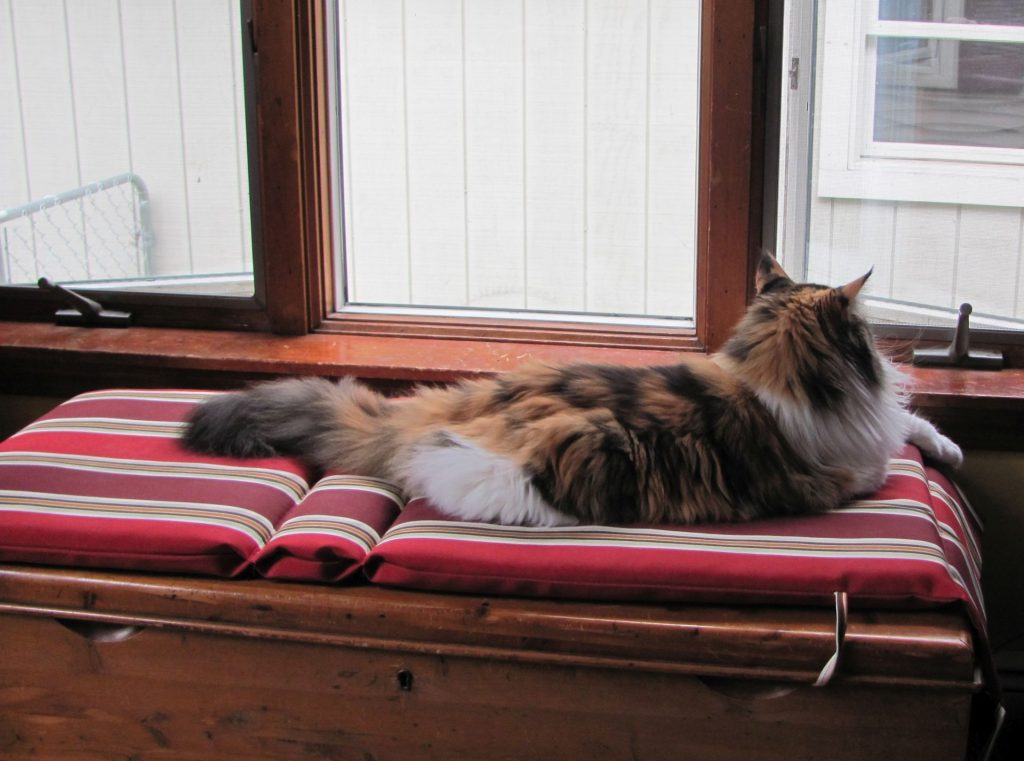