Those who are not based on the East Coast of the US may be unaware that we are hosting yet another Nor’easter.  Nor’easters may carry snow, rain, or the ever-popular wintry mix, but the signature aspect of Nor’easters is wind.

Lots of wind of the steady strong variety interspersed with gusts capable of lifting tractor trailers off of the interstate and flipping them casually into the median.

Here at the Cat Farm and Confusion Factory, we are experiencing a wind storm, with intermittent snow squalls.

The wind howled us to sleep last night, and it was still howling up a storm this morning while Steve and I were drowsing under the close supervision of three coon cats.

“What was that?” I asked, without, yanno, actually getting up, because I am not one of those who runs toward the scary noise.

Steve, who is, was already looking out the bedroom window in the end-wall.

“It could have been that a bunch of wires was yanked loose from the house,” he said.

“Have a bunch of wires been yanked loose from the house?” I asked, still not getting up, because, really, what would be the point?

“Looks like one of the branches of the pine tree bounced, and yanked out the wires; there’s a weird tangle on the ground,” Steve said.

For those who are not fully aware of the situation of our house, we are surrounded by pine trees, as is most of the state above Portland; and the various folk invested in wires very often just cut a tunnel through the branches so that the wires can be threaded through to their destination.  Not only did the wires from the pole to our house pass through a pine tunnel, but! when the across-the-street neighbor got his power run in, CMP cut a pine tunnel through one of the trees on his property, and also through our tree that already had a pine tunnel, in order to connect him to the grid-pole at street side.

Closer inspection reveals that What Actually Happened is that one of the neighbor’s several long, tall pine trees snapped — no; shattered — under the assault of the wind.  There’s at least ten feet of tree on the ground — the pointy crown top on one end, and a wicked sharp sword of raw wood on the other.  Looking up, I could see at least four widowmakers hung up in the branches of the surrounding trees, and wires, dangling.

What appears to have happened is that the tree exploded, the down branch hitting the wire as it fell, tearing the connections out of the neighbor’s house, bouncing on the shared wire hard enough to momentarily take out the cable connection at our house.  The down wires on our property appear to be old phone cables, and they are merely stretched down to the ground by the weight of a tree limb; connection to the house has not been severed.

Not really sure what’s to be done right now.  Neighbor appears to be in good order, despite the loss of power.  Here, the cable reset itself, the power never flickered, and God She knows who we need to call about the down lines.  Clearly, they need to be removed.  On the other hand, they don’t seem to be a threat; certainly, it’s not worth calling someone out in the middle of a Nor’easter to do it today.

In Other News, I’m multitasking — doing the laundry as I’m looking over our schedule for MidSouthCon, and starting to make piles to stuff to bring with.  One of the things we’re tasked with is reading “good parts” from Liaden books, which ought to be. . .interesting.  I also need to brush up on my Epic Heroines.

I think that’s all and everything of note for the moment.  Everybody stay warm, and safe, and dry. 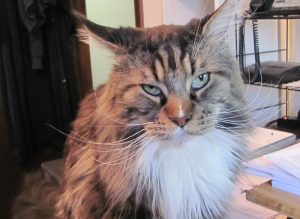 5 thoughts on “Everybody talks about the weather”