I have one more section of Fifth of Five to read, but, having read two-thirds of what’s there to read, I can say with confidence that it is Not Awful, it’s merely Not Done.

So, working on that.

It snowed Friday night, and Saturday it rained.  The plowguy called early to say that, unless we needed to go out, he was going to defer plowing until the rain stopped, so that he could remove crusty snow, leaving a walkable surface on the drive (as opposed to remove the snow, and letting the rain create a driveway skating rink).  I retired to my office to work, and went out this morning to remove crusty snow from the steps.

The only flaw in this plan was that the car was frozen shut, and no suasions of mine would budge any of the doors.  Steve mixed up an alcohol and warm water brew that did get past the ice seal, but it was a frustrating several minutes.  My last car had a remote starter.  May see if we can get an aftermarket remote installed in this car.

Going forward, the weatherbeans are calling for a snowstorm starting 2:00 am-ish, and continuing until early evening, leaving from 6-9 inches (locally up to 11 inches) of snow behind it.  The plowguy, when he came by this morning, wanted to know if we had to “get out” tomorrow.

No, I said; we’re working tomorrow.  He sighed and produced a sort-of grin.  Yeah, he said; me too.

Partly as by-product of the on-going effort to write sell-copy for “Degrees of Separation,” I’ve been thinking about what “makes” a story.

Certainly, a story has a beginning, middle, and an end.

A story shows growth, or change.

. . .all the stuff you learn in Writer School, sure.  But — what “makes” a story?  Certainly, I — and I am not alone in this — have received reader reviews, and reader letters, indicating that in Story A “nothing happens.”  What they mean by that varies widely, from “there were no gun fights in this story,” to “I had to read description and dialog,” to “we already KNEW how this was going to end, so writing down the middle was pointless,” to “I didn’t like this.”

The answer, for me, is that the characters make the story — long story, short story, middling story.  People, what they do, why they do it, how they feel about it, are intensely interesting to me.  So, those are the kinds of stories that I tend to write.  This does not, note, preclude gun fights, or space battles, or car chases, but I maintain that a story without a car chase…can still be a story.

Peripherally on topic:  In case you missed it, “Block Party,” by Sharon Lee and Steve Miller is available, free to read! starting on the Baen.com front page (you need to scroll down past the new books section).  Share it with a friend.

Here’s a picture of the author, working at home, something I am now going to go do more of. 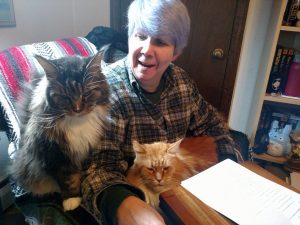