Early in the morning of Wednesday, August 2, Steve and I turned the keys and the cats over to the house-sitter, and took the show on the road.  Our first goal was Coraoplis, in Moon Township, PA, where we were scheduled to be Writer Guests of Honor at Confluence, from Friday, August 4 through Sunday, August 6.

This was my first Confluence (I had, way back in the Dark Ages, attended a Phlange in Pittsburgh, which was the convention preceding Confluence) and I had a blast.  Everyone was very kind, interested, and interesting, too.  Confluence is a small con, but I swear to you that the Entire Membership attends all of the panels.  All of my panels were packed, as was my reading (I read “Emancipated Child” — an Archers Beach story — and Steve read “Intelligent Design” — a Liaden short story), and my rant.  The Guest of Honor speech was very well-attended, and, well — did I say we had a blast?

Moon Township being a far more cosmopolitan area than, oh, Kennebec County, Steve was pleased to find — and consume — pierogies, a Food of His People which he had not had for years.  And we were amazed to discover, at the end of con dinner, the existence of Burgatory.

Our after-con first goal was North Tonawanda and the Herschell Carousel Factory. 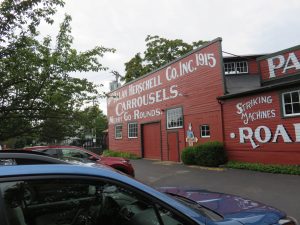 If you’re ever in North Tonawanda New York, you must go to the Herschell Carousel Museum; it’s that awesome.  And? There is a fully restored Herschell Carousel on the premises — one ride is included in the cost of admission; rides thereafter fifty cents each — more than a bargain!

The surprise takeaway from the museum was that the Herschell Company saw carousels as a way to sell the motors that provide the motivating force.  There were, in the museum, advertisements from the papers of the day, soliciting entrepreneurs to sign into the carousel franchise.

Talk about skewing your worldview.

We spent so much time at the carousel museum that we missed lunch and had a quick, catch-up meal at Pane’s restaurant, which is the sort of place that makes you want to move to wherever it is so that it can be your neighborhood restaurant.

After our belated meal, we got back on the road to our second post-con goal of. . .

Niagara Falls, New York (no, we didn’t go to the Canada side; yes, we had a good time, anyway), where we claimed our suite at the Red Coach Inn (which was surely an extravagance, but, oh, my goodness, I did love that suite, with its canopied bed, and the gas fireplace — the fainting couch! — and the brocade curtains, all of which overlooked the rose garden, and the sidewalk, and just right over there, the flashing, roaring river. 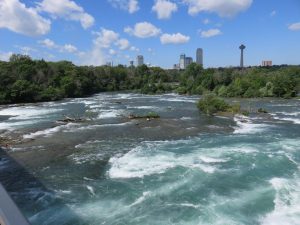 On Tuesday, we walked over Goat Island to pay our respects to Tesla, and also to take at least a gazillion pictures.  We circumnavigated the island, then walked across the Three Sisters Islands, and in general had a very pleasant morning.  After lunch and a nap, we took another walk, down through the gardens to the various landings and overlooks, finishing up the evening with a nice dinner at the Red Coach Inn, and a viewing of the fireworks! 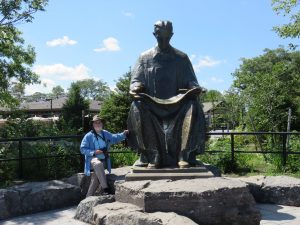 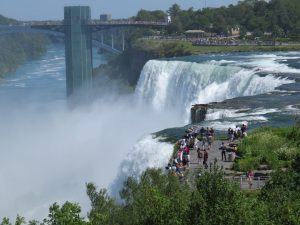 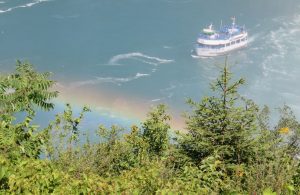 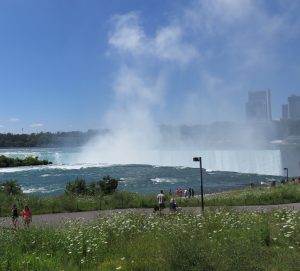 Wednesday, I took a ride on the Maid of the Mist, and got well and truly soaked.  I can report that my quick-drying cargo pants are, indeed, quick drying.  Not so much the red sunhat.

Thursday, we left town, bound for Binghamton, New York, and the carousel circuit — which is a post in itself.  The short form is that, on Friday, we located and rode all five (number six, which is located in the zoo, is down for maintenance this summer), and won for ourselves the coveted Carousel Circuit rider pins.  Here’s mine: 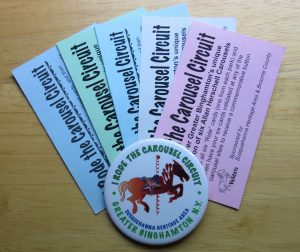 On Saturday, we left Binghamton, over-nighted at World Famous Quechee Gorge, and so to home on Sunday.

And that’s the quick version.  I do intend to write a blog post about the Binghamton carousels, so — watch the skies.  In the meantime, I need to get back to work.