Asyouknowbob, we live in the country, surrounded by woods and fields and occasionally the Mice of the Field will send a Covert Operative into the basement to see if we’ve let our Security Contract lapse.  In fact, we haven’t, and while the fate of the Covert Operative isn’t necessarily foregone, it does appear that the Mice of the Field are usually in receipt of the message that, whatever is in that basement, It Got Charlie, too!

Last night there was apparently An Infiltration about the time we were winding down to go to bed.  Sprite heard the perimeter alarm go off, and rushed down to the basement, followed by Belle, with Trooper bringing up the rear.  When I looked down before lights-out, Trooper was sitting in back-up position at the foot of the stairs; his job to make sure that the Covert Operative did not make it upstairs.  Neither Belle nor Sprite was in evidence, and the basement was Vewy, Vewy Quiet.

I went to bed.

Now, usually in the course of these Operations, a cat will make a point of stopping by the bed at some point in the evening, just to check in and make sure we’re dreaming right.  Last night there was no check-in.  Not one.  Which, when you’re used to being walked on by cats when you sleep can be a little disorienting.

I woke up around five, took my Necessary Medications, noted the lack of cats on the upper levels, put on my robe, and opened the basement door.

Trooper immediately charged up the steps, and gave me multiple hugs around the legs, possibly encouraging me to stay abovestairs, but I was adamant, and down I went.

I was met by Sprite, who, prancing, led me to the sad remains of the Covert Operative.  Belle was nowhere in sight.

I went upstairs to procure a coffin, so that we might show proper honor to a worthy opponent.  Belle appeared as I came back downstairs; she and Sprite and Trooper stood by solemnly while the late Operative was transferred to his empty butter cup.  Trooper and Sprite came upstairs with me, as an honor guard, while Belle stayed behind to continue her survey of the perimeter.

The Covert Operative was consigned to the gentle grasses, and I went back inside, now thoroughly awake, to find Steve up and about, also, having heard the kitchen door close.

So, we praised the cats, who came upstairs in shifts, drank coffee; and were just finishing breakfast when the school bus went by.

I see a nap in my very near future, but, for now, since I’m up and caffeinated and all, I should probably do some work. 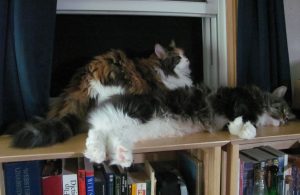 6 thoughts on “Up before the school bus”