This just in, from the April edition of LOCUS:

This is the deal we’ve mentioned as the Liaden Triple Threat.

To sum up for those keeping score at home:

There are TWO Liaden books scheduled for publication. They are:
The Gathering Edge, May 2, 2017
Neogenesis, January 2, 2018

What follows is a quick review about How Freelancers Get Paid, in answer to some questions on Facebook, and also to (hopefully) forestall the (almost inevitable) Wealthy Author fantasies.

A “six-figure” deal sounds like a lot of money.  In fact, the way we count here at the Confusion Factory, it is a lot of money. However, it is neither: (1) extra money (people tell me this is a Thing; personally, I’ve never seen “extra” money in my life); or (2) a windfall.

What it is, is our paycheck — and it’s not going to come as One! Huge! Check! Lookitallthosezeroes!

No, how those six-figures are going to reach us?  Is in four payments.

The first payment will arrive sometime after we’ve signed the contract (we haven’t actually gotten the contract, yet, though we’ve discussed the terms).  That “on-signing money” will be one-fourth of the total “six-figure” deal LESS our agent’s 15% fee.  When that check reaches us, about a half of the total will be put aside for taxes.  The rest goes into the household budget, where it will be used to buy cat food, and pay the mortgage, and put gas in the car, and pay doctor’s bills, and all the other things you spend money on.

When we turn in the first of the Triple Threats (which will be, conservatively, some time in 2020), and Madame the Publisher accepts it (this is called “D&A” or “delivery-and-acceptance” money), we will receive the second fourth of that “six-figure” deal, less 15%.  Half will be put aside for taxes, and the rest will go into the household budget.

The avid student will note that this whole process seems to involve widely separated infusions of Lumps of Cash, during long periods of, err, no cash at all.  Or very uncertain cash.

Twice a year, more or less, we do receive royalties.  But you never know what your royalties may be, and, in fact, it is possible to have a period in which you have earned no royalties, which means buying cat food (our Number One priority for writing Liaden books) gets…tricky.

Writers have various methods by which they even out their cash-flow, in order that they can have monthly budgets just like normal people.  Sort of.  Some have day-jobs.  Some have a spouse with a day-job.  Some write short stories on the side, package them as ebooks and sell them on Amazon/Baen/BN/Kobo & whatever.  Some have Patreon accounts.  Some do a little of this, and a little of that, and somehow all the little trickles of income form a monthly stream that augments the Big Lumps, and keeps the monthly household on a steady course.

We here at the Lee-Miller/Scrabble-Trooper-Belle-Sprite household have a couple of income streams:

We publish eChapbooks; the 23rd Liaden chapbook, Change Management, was just published at the end of February.

We occasionally post out-takes, shorts, and podcasts to Splinter Universe, for which we gratefully accept donations.

This Very Blog has a button on the side-bar:  Buy Me A Coffee, which really ought to be Buy Us Cat Food, but you get the idea.

And some kind folks simply send us donations from time to time, or set up on-going Paypal payments, or whatever they feel that they wish to do.

You’ll notice that several of these income streams are patron-based.  Which is to say, people decide that they’d like to keep the supply of cat food steady, or to be sure that we have plenty of life-giving fluid to support us in our efforts.  We appreciate — we very much appreciate — all of those donations, and you are, yes, doing Something Real for which we thank you, very much.

So!  The big lesson to take from all of this is!

YayYayYAY, we’re under contract for six books!  We get to hang out with you guys for five or six more years — is that terrific or what? 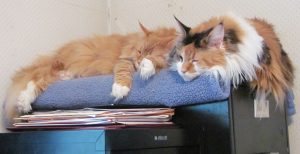 9 thoughts on “Writing News and The Economics of Freelance”