Yesterday, Steve and I had manymany errands to run in town, including the appointment with the second doctor, and another, with our lawyer, who we haven’t seen in a few years.

New medication was introduced; paperwork was initiated; groceries were topped off.  And etcetera.

Since we were All Day In Town, we ate lunch at the world-famous Governor’s Restaurant.  Steve had the liver and onions, which he pronounced excellent.  I had the chicken pot pie, which did not go above adequate.  The filling was everything I could have wished for, but the pie crust itself was industrial grade, and I wound up leaving it, and just ate the insides.  And my squash.  The squash was wonderful.

Anyhow, we arrived home in the dark, by which I mean after 4:00 pm, had a snack, caught up with email, and retired to the couch.

I don’t think I reported here that we are now the proud owners of a smart television — the kind that connects to the network, and from which movies and television shows can be streamed.  Steve has been lobbying for one of these for. . .awhile now, and we finally found one at a reasonable price from a place that would (a) deliver it, and (b) take the old television, which weighed approximately two tons, away.

Myself, I didn’t see the need for this particular sort of new tech — until last night, when I retired to the living room, exhausted from our efforts upon the day, and intent on nothing more than to finish reading my book over a glass of wine.

In turns out that, while I was answering email and updating the checkbook, Steve had introduced the new TV (do people even call these things TVs, anymore?) to the network, and had signed into Pandora, and the Instrumental Folk Channel, which is a favorite with both of us.

Today, I still kinda feel like I’ve been beat with a stick, but! there’s words to write, so I believe I’ll have at it.

Everybody stay warm.  Or cool.  Depending on your hemisphere.

Oh, hey.  If it really is Thursday — here’s a Throwback picture.  Steve and I signing at the Augusta, Maine Barnes and Noble, sometime around Christmas, 2010. 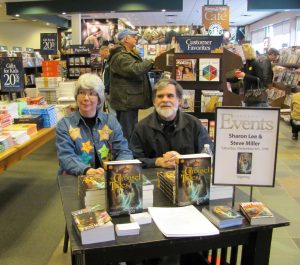