In this case, too much.

Having finally achieved mastery of my form in the Pullman Class, I decided, naturally, to vary.  I thought that it would do no harm, and possibly significant good, if I were to make the honey-oatmeal-wheat bread that I’m partial to, and bake it in the Pullman Pan, thus creating Sandwich Bread.

So, I did that.  The recipe for the honey-oat bread normally makes two one-pound loaves; the Pullman Pan accommodates one really big loaf.  Things went pretty much as I expected that they would to the point where I put the bread into the oven.

With a Pullman Pan, you cover the bread for the first 25ish minutes of cooking, to keep the bread square, taking the lid off in the last 10 minutes in order to brown the top of the loaf.

When I opened the oven to take the lid off, I noticed that the bread dough had overflowed and there were curlicues of bread on the oven rack.  Not good.  I took the pan out in order to remove the lid — and it took Steve holding the pan and me pulling on the lid to finally get it off.  The bread crust, of course, was torn.

Back the pan went into the oven for the final 10 minute browning, came out,  thumped appropriately hollow, and went onto the cooling rack.

Experienced bread makers will know what this means.

Yeah, not done in the middle.

So, as an experiment, for Science!, we have a success, in that we tried.  Obviously, if I wish to continue on this course, Tweaking will be required.

For the moment, then, since we’re writing a book and all like that, the honey-oat will go back to being baked in its two regular bread pans, whence it emerges tasty and, more importantly, cooked through.  And I will continue to bake Pullman Bread for Steve, so that sandwiches can happen.

Writing has been going forth, with about 14,000 more-or-less usable words written in the last four days, which is, Ladies and Beans, what can happen when the calendar is clear and you turn off Facebook and Twitter.

It also helps if you know where this bit goes, because it’s one of the foundation shticks that convinced you to write this book in the first place.  Run while the route goes downhill, and all like that.

For those who dote upon numbers, Neogenesis — by which I mean the melded Part One, and the still-under-construction Part Two — now clocks in at plus-or-minus 82,400.  Which would be more exciting news if we were looking at a 100,000 word book, but at a projected length of 130/140,000 isn’t, so much.

Given the structure, I briefly flirted with SFWA’s lower limit for novels and an adding machine, but I’m not sure I can make it all come out even.  And 160,000 words is a LOT of words.

Today, for the first time in a couple weeks, I go back to the gym, and hope not to collapse into a hacking heap on the treadmill.  After, there are errands, while I’m in town and all, and then home, for the midday meal, and so to work.

Tomorrow, I get my hair cut, which is Long Overdue, and then things are pretty much clear on the calendar/writing front until November 6, which, in addition to being the Death of Daylight Savings Time, is our wedding anniversary.  Not sure what we’ll do about that.  Possibly put off the celebration until Tuesday (since we Early Voted), and run away from the news, upcountry.

End of the week is Comic Con, which will be fun for All the Usual Reasons, and also because I’ve Completely Missed ever being in the state of Rhode Island before.

So that’s today’s episode in the Exciting Life of a Writer.

Hope y’all are doing well — and welcome to November.

“Surely, you’ll do better to appeal to Captain Waitley in this matter?”

“Of course there is.  There can be nothing other than complications, in Captain Waitley’s orbit.” 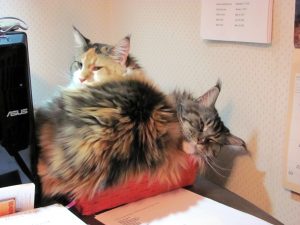 4 thoughts on “The bread also rises”