Audible lets us know that!

There’s a free excerpt available of the audiobook edition of Alliance of Equals.  Here’s your link.  Enjoy — and tell your friends!

I had planned to go to the ocean today, but that wasn’t possible, because Reasons.  Steve and I did go cat-shopping (as opposed to shopping for cats), because one of the sisal-bound (you notice I say “one of”) scratchers has gone to that great sisal forest in the sky. So, naturally we need to replace it.

We knew what we wanted, we had found what we wanted on the web last night, but — we wanted to take a look at it before committing.  According to the web, the item was available at PetSmart, so off to Augusta we went, to discover that —

You see where this is going, right?

Right.  Plenty of devices made for the grooming of cat claws, but of the perfect scratcher there was no sign.

Since we were in Augusta, where there are two pet supply emporiums, we went down to the other one, but — no luck.

So, after stopping for lunch, we came home and ordered the dern thing off of the internet, anyway.

Neogenesis. . .stands at about 85,000ish words.  Maybe.  You know what I’m going to wind up doing, and so do I, and I might as well just make my bow, and Do It, instead of wasting energy trying to do it the other, more comfortable, way.  But — old habits.  Anyway.  Back to writing scenes with an eye toward building bridges after I’ve written enough to know where everybody is, and when.

About today’s blog title:  AC/DC’s “Dirty Deeds Done Dirt Cheap” has long occupied a Special Place in my Heart, which pretty much proves that I am Not a Nice Person.  And the rendition that I know best includes, at the end of the third stanza, where our narrator is listing the services offered, he says:

Google Lyrics renders “high mountains” as “high voltage,” which just isn’t the same.  And what does Google know, anyway?

So, I have used that line as I know it, for the blog title. And now?  I’m going to send you to Joan Jett’s cover, which she ends at the bottom of the third stanza.  Here’s your link.

“Indeed not!” Bechimo sounded scandalized. “It is the captain’s place to order for ship and crew.” 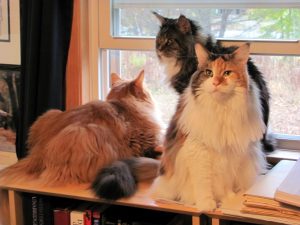