So, Steve needed to be in Gardiner early this morning for Reasons, and I went with him.  For this outing, I for the first time, loaded All The Things into the Scott eJacket, including tablet, phone, camera, ID, money (forgot to try the water bottle pocket), pens.

The jacket worked pretty well, but I was surprised to find that my camera weighs more than my tablet.  Or, as Steve suggests, the tablet, being flat and thin, spreads its weight more cunningly than the little rock that is the camera.  In any case, the right side of the jacket was noticeably heavier than the left side, so I’ll need to work on balancing my load, so to speak.

While we were in Gardiner, and after Steve’s Mission was completed, we went over to Bridge Street and had a late breakfast at the justly famous A1 Diner, which has been serving at the same location — not only on Bridge Street, but on the bridge — for 70 years, this month.

After breakfast, we drove the long way to Rockland, and so to home.

Here’s a picture of me at breakfast.  Photo by Steve Miller. 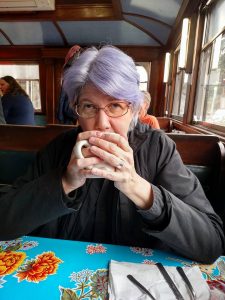