So, y’all are probably anxious for news of the raisin bread.

The bread came out pretty well, though, next time I’m going to put in more raisins.  The recipe I had was light on raisins, and couldn’t seem to be able to decide if it wanted to be cinnamon swirl or raisin bread.  Because the recipe made two loaves, I did the cinnamon filling for one, and just baked the other free-form, so to speak.  Both sorts baked and tasted just fine, except, like I said, they needed more raisins.

Where it went off the rails was at the icing stage.  The recipe for the icing told me to use two cups of confectioner’s sugar, one teaspoon of vanilla extract, and “enough milk to make a thick paste.”  I did not understand this to mean, “start with a half-teaspoon of milk, and if that’s not enough, go for another half-teaspoon,” so what I got was sugar glaze.  Which is fine.  But next time I’ll know.

Many thanks to everyone who sent me a recipe, or a link to a recipe, for smearcase!  I’ll be trying that some while down the road.

In other news, a kind friend gave me a Scott eVest jacket for a belated birthday present.  I’m still studying on how it works, but, wow, isn’t it just like a pilot’s jacket, with public pockets, and hidden pockets, and a special place for your license, and a pocket that holds a water bottle?  I’m impressed; and I’m going to get a lot of use out it, too.

Work on Book the Next goes forth, for those of you who are of a nervous disposition.  Also coon cats are being brushed and cuddled, though not as often as they would like.  Last night, the low temperature here at the Confusion Factory was 33F/0C, and the high temp today is set to top out at 61F/16C.

And that?  Catches us up.

Hope everybody has a lovely weekend. 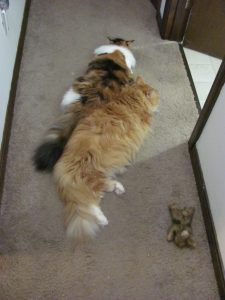 One thought on “Sweet”