Yesterday was a half-holiday.  Steve made His Own Sort of Gourmet Mac-n-Cheese for our supper, then we — with the coon cats, who were very interested, indeed — viewed The Book of Life, and assorted short features.  We also finished reading aloud Feet of Clay, the. . .third? Night Watch novel.  Next up is Peter Pan.

Why Peter Pan, you ask?  Well, when we were down south, sitting vigil for Steve’s step-father, I was at one point the only one in the room, aside Pete.  I figured he might miss all the noise and voices, being so very used to living in hubbub.  I’m not much of an extemporaneous chatterer, but I can certainly read out loud.  So I started reading Peter Pan, since I don’t seem to have The Prince and the Pauper on my tablet at the moment.  Steve came in at some point, and when I would have stopped, asked me to go on.  Turns out, he doesn’t remember reading Peter Pan, so we’ll finish it up properly.

After Peter — or, at least, starting on September 30 — we will of course begin reading A Night in the Lonesome October one chapter a night ’til Halloween, as has been our custom for some years now.  After that, perhaps it will be time again for the Watch, and Jingo.

In possibly more relevant news, readers are already writing to me in various states from mild curiosity to barely-restrained panic, wondering why it is that they cannot yet! pre-order the electronic edition of The Gathering Edge from Amazon (and I assume the other on-line bookstores).  The fear is that …Edge will only be available in hardcover, and be released in electronic at some later date, after Demand Has Built.  Or something.

Now, if y’all will cast your minds back, you will recall that Amazon has not, at least for the last four Liaden titles, opened pre-orders for the electronic edition this early.  Yes, I say early.  …Edge is scheduled to be released in hardcover on May 2, 2017 — more than eight months from now.  Regardless of what may be done for other titles by other authors, for Liaden titles — and the Carousel titles, too — Amazon opens pre-orders for electronic editions somewhere between one month and three days before the hardcover release date.

So, there’s no need to panic, honest.

Related to this — yes, work is going forward on Book the Next, still without a proper title, poor tyke.  Before our unfortunate break, I had said that I would post snippets, but not word count, because of the Very Odd Way in which this book is going together.  That is still in force.

So!  Today’s blog post title is brought to you by Foul Ole Ron, from Feet of Clay by Terry Pratchett.  Because it amuses me.

“Don’t you get attitudinal with me! Won’t hurt you to show a little respect – and a lotta restraint! What if he’d been driving? Or flying? You might’ve killed him, is what — and I ain’t having it! Acazzi?” 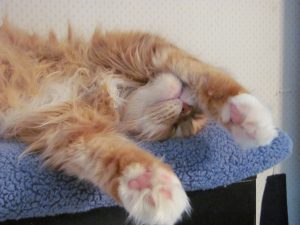 6 thoughts on ““Queen Molly says watch your back, mister.””