As I write this, there are 132 reader reviews on Amazon for Alliance of Equals.  Only 68 more to hit our goal of 200!  You guys are awesome.

Also, I see that Dragon in Exile has picked up a few reviews, too, as a sort of overflow\proximity event. Thanks to everyone who took the time.

Here in Central Maine today, it was hot, for values of “hot” above 90F/33C.  Which is plenty hot enough.  I was on at the hospital, where the inside temp was nice and coolish; Steve turned on the A/C here at the house, and the cats have taken up strategic positions in puddles of coolth.

By virtue of arriving at the nice, cool hospital early today, I actually had ten minutes of peace and quiet in which I Realized several important things about the novel-in-progress.  It would perhaps have helped if I’d realized them earlier, but better late than never, I guess.

Maybe I need to go to the hospital at lunchtime every day, and just sit at a table for ten minutes, with my notebook open and pen in hand.  Or not.  It’s possible that the various thought fragmentation nodules have at least been quietened, if not completely silenced.  We very much hope that this is the case.

Later this week, we’re to meet with the photographer for to have our heads shot, and, while we’re at it, have some PR shots taken that will reflect the reality of this century, purple hair and all.

Tomorrow, there is nothing scheduled (except, yanno, taking the trash out).  I believe that is my cue to take the laptop and lay claim to the couch in the living room, with my notes and new insights.  So that?  Is what I will do.

Everybody stay cool.  Here, let Belle show you how: 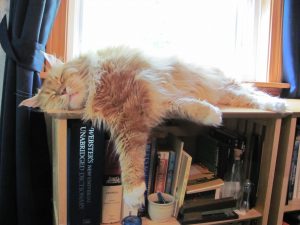 Today’s blog title is brought to you by Talking Heads, “Girlfriend is Better.” Here’s your link.

3 thoughts on “I’ve got a girlfriend with bows in her hair, and nothing is better than that. . .is it?”