So, Steve and I went to BaltiCon 50, to join in the celebration.  As one friend said, “Parts of it were good; many parts were excellent.  We’ll put the rest out of our minds.”

It was, as one might expect, with such a massive list of returning guests, and the 50th writer Guest of Honor being George RR Martin, something of a zoo to schedule.  Kudos to the scheduling gurus, and to the guest liaisons for their help and their continued good humor in the face of the many challenges that presented during the course of the con.

Steve and I signed a bazillion books, had dinner and drinks with various of our colleagues and friends, did a couple of readings and a presentation; and participated in a. . .demonstration called “Story and Song.” This was a very interesting proceeding and I hope to see it done again at many cons in future.

Basically, the idea is that an author will read a passage from a book known to have been filked.  A filker will then sing the song that was inspired by that scene/book.

We read the scene from Agent of Change where Val Con is on the Clutch ship and trying to figure out why the so-called “survival loop” appears to have lost its mind.  This was followed by Bill Roper (one of the filk guests of honor) singing Lee Gold’s “Agent of Change.”  Connie Willis read from The Doomsday Book, followed by “Lost in Time.” (I’m not going to remember the names of all the performers. This is because I have a memory like the clerical hat for the order of the Flying Spaghetti Monster.)  Roberta Rogow  sang “Get Them Lizards Every One,” in celebration of Harry Turtledove’s (see? nor all the names of the works); and Gary Erlich sang “The Last of Pierson’s Puppeteers,” following Larry Niven’s reading from Ringworld, regarding Teela Brown, the girl who was bred for luck.

In all, a very enjoyable time.

Now, one of the. . .features of the scheduling program being used by BaltiCon this year was that! If there was conflict?  Say, two panels scheduled for the same time in Room A?  The program would helpfully hide one of the conflicting items.  Yes, you read that right.  The program did not simply flag the problem, it fixed the problem.

Therefore, my presentation disappeared, and, given the lack of data to the contrary, I figured it had been cancelled.

I am very grateful to Joni Dashoff, who caught me as I was leaving the filking item, and insisted that my talk was still on.  I walked back to the room, just in case there were people waiting for me.  There were, and I proceeded to give my talk (though, since I’d left my notes at home, it was more like proceeding to babel for 50-ish minutes.)

Between us, Steve and I figured we missed some panels we were supposed to have attended; if we shorted you, or didn’t show, please accept our apologies.

We left Baltimore City (which, lest it be forgot, is my own, my native land) at 4 a.m. yesterday, Tuesday, and made it home in one, marathon drive, clocking a smidge over 700 miles on the day.  Let it be known that I prefer Maine (It’s so green!  Also?  Quiet.)

I don’t have very many pictures from the con (if you have pictures, especially of Steve or of me, please feel free to share), but I do have this one of Steve and me, dressed for Opening Ceremonies, and long-time Friend of Liad Deb Matsuura.  For those who keep of track of such things, that silver-and-black thing I’m wearing is, indeed, the New Corset.

Also!  Just to bring this up to date, we went out mid-morning to take on groceries.  Shortly after we returned home, a UPS truck pulled up and off-loaded thirty copies of this: 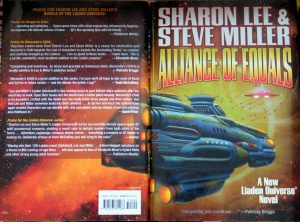 Congratulations; you are now caught up.

Still on my plate today is ordering and submitting our receipts, and — a nap with Trooper.  I promised.

Today’s blog post brought to you by Bruce Springsteen, “Badlands.”  Here’s your link.