In which we prove that writing is a science.

Astute readers will recall that I reported having broken 40,000 words on Book the Next on Monday evening.

*Roll Call is pinned to the top of Blog Without a Name until the end of June in order to give everyone who reads a chance to see it and respond, if they so desire.  Some folks only check in once a week or twice a month, and we are at summer (for some of us), and people are on vacation

*The Roll Call was not mirrored on LJ because LJ has ongoing problems with spam, and I have had to sternly restrict the list of people who can post there.  And, yanno, I wanted all the answers in one place.  Thank you for your patience and understanding

*Nope, you are in no way obligated to read Blog Without a Name instead of Eagles Over the Kennebec.  In most cases, content appears on both sites

*Returning for a signing at the Uncle’s in Minneapolis is, perhaps, in the future.  Steve and I will be guests of honor at Marscon in Bloomington, next March and have been talking with Don about when would be best for us to come visit him while we’re in the area

In theory, yes, the new story goes live on Baen.com today.  I stress that this is Only A Theory; I have not have confirmation of this from the folks who would know best.  Also!  I am scheduled to vanish into my volunteer gig for most of the day, so will be out of pinbeam range.  So — you’re kinda on your own, here.  Happy hunting.

The delmae, like Liadens had it. Smart woman, as far as he’d ever heard. Haz had a high opinion, but then, Captain Robertson, as she’d once been, was twice a hero in battle, and that was the kind of thing that would count for somebody with Haz’s bringing up. 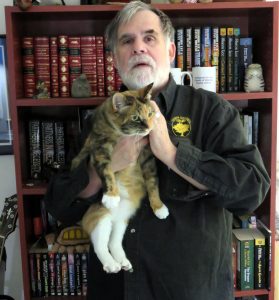 Today’s blog title brought to you by Warren Zevon, “Ourselves to Know,” because, really, who can resist a rock song about the Crusades?  Here’s your link