We are back from RavenCon, where we were feted and treated like sci-fi royalty.  Despite the 1900 mile round-trip from Maine to Williamsburg and back again, we arrived home fresh and bouncy and ready to deal with the laundry.  Or maybe not.

If you get a chance to go to RavenCon, do it!  Splendid con, well-run, and offering something for everyfan.  Kudos to Chair Mike Pederson, and his staff (whom I will not name, for fear of inadvertently leaving someone out).  And a special shout-out to Ginny Barnett, who volunteered to be our minion for the weekend, and did a superb job.

The week going forward includes the writing of a short story, now that a workable idea has, however belatedly, finally shown up; finishing The Gathering Edge, which no, is not playing nice, but which will, byerlady, be off our desks before we leave for BaltiCon, or I’ll know the reason why.

Steve will be leaving for Portland and the Maine Democratic Convention on Friday; I plan to join him on Saturday morning, for a full day of Democracy.  Since Bernie won Maine in the caucuses, I remain somewhat baffled as to the purpose of this particular exercise, but I suppose All Will Become Clear in time.

In other news, Baen has republished in ebook form Janet Kagan’s Mirabile and also Hellspark.  Those who read here regularly know that Hellspark is one of our — that’s Steve and me — favorite books in any genre; and between us, we’ve read a LOT of books.  Here’s your link to Baen’s Janet Kagan page; I hear that Mirabile has made it into Amazon’s catalogue, but that Hellspark has yet to make an appearance.  (And, forestalling the inevitable — No, Baen was not able to acquire Uhura’s Song, which was of course, written as a work for hire in the Original Trek tie-in series.

In other, other news, we came home from RavenCon to find that the house-sitter had taken delivery of a case of Dragon in Exile mass markets.  They’re pretty!

And that?  Is all the news that’s fit to print.

What did y’all do while I was gone? 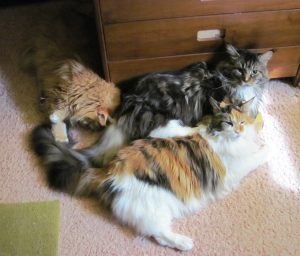 7 thoughts on “Today, we do laundry”