Being a writer is a lot like being a Liaden Scout, in the sense that both involve long stretches of boredom punctuated by brief moments of terror.  The Scouts have it over writers in the mucking about in the mud part; and in general writers have the advantage in felines.  But, otherwise, almost exactly the same.

We here at the Cat Farm have just entered a period of High Energy, if not outright terror.  Of course, we have a book due on April 15, and into that already charged situation was introduced the page proofs for the mass market edition of Dragon in Exile, with a return deadline (originally) of Monday, March 21, which, because Central Maine and FedEx, would have given us 2.5 days to proof-and-mark-up because the last FedEx pickup of the week is Friday at 4:00 pm.  We did negotiate a one-day delivery delay, which gained us the weekend to work, so!  Deadline now Tuesday, March 22.

Steve is taking the lead on the page proofs, and I’ll do spot checks after he’s done, so it only seemed fair, when the copy edits for our Alien Artifacts short story, “Shame the Devil,” came in, on the evening of March 15, for me to take them.

We’re still expecting the page proofs for Alliance of Equals to land between now and the hand-in date for The Gathering Edge.  That will be a more intense experience than going over the proofs now in hand.

Into the roil of sudden busyness, was tossed the info (like chum to the sharks, says the backbrain.  O, backbrain.) that Baen will be destroying the remaining hardcover copies of Duainfey and Longeye still in their warehouse, which is sad, but inevitable, and also!  that we should keep a Sharp Eye Out for paper ARCS of Alliance of Equals.

And, I have a call in to my doctor because of this stupid knee injury, which, despite being pampered ridiculously, still doesn’t seem to be healing like it should.

So, anyway, that.  We may be just a tad thin on the internet for the next few weeks.

I have a question for my colleagues who read here, based on a tweet I saw this morning, and I’m. . .intrigued and/or baffled.

How many of you count speaking roles in your latest WiP, to make sure you have gender parity?  (Full disclosure:  It would never have occurred to me to do this.  I don’t even count the cats in the story.)

Everybody have a good Wednesday.

Here, have a picture of Sprite atop Mount Page Proofs. 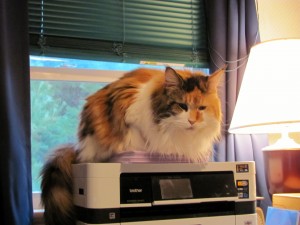 Oops!  Today’s blog title brought to you by Dire Straits, “Romeo and Juliet.”  Here’s your link.

One thought on “Oh, Romeo — yeah; you know, I used to have a scene with him”