It snowed on the overnight — wet, gloppy snow, which then changed to driving sleet-and-rain, the so-beloved Wintery Mix.  We woke up, early, because Tai Chi class on Wednesday, to a driving rain.  The surface of the driveway was a kind of mud slurry, iced with brittle snow, and when the town plow went by, the blade was pushing a wave that would have been credible off of The Big Island.

Since I don’t believe in winter road surfing, I decided to give Tai Chi a miss and practice my small dance here at home.

However, today is also Hospital Day, so, after breakfast, when the rain stopped, I again surveyed the situation.

Long story short, the car is presently stuck in the mud.  This situation will rectify itself overnight, when it’s supposed to get cold again, but for right now…the writer is in.

The cats have declared a Snow Day and are lobbying hard for everybody to go back to bed.  Steve is currently under assault from Belle and Scrabble, who are practicing the deadly Synchronized Snoring.

Speaking of Belle, last night’s dream (she was sleeping on my stomach for a while), concerned a Big Jumble of people and furniture; if I had to guess, I’d say that we were living in shared housing of some kind, and our apartment/rooms were going to be painted, so we had to move all our stuff to a holding area.  In the process of doing that, and relocating our four cats, I discovered in our space, a plush white cat with grey cloud markings, black tips on her ears, and a little grey mustache perfectly placed under her pink nose.  She was very friendly, and obviously “knew” me.  I was confused, and texted Steve, “Do we have FIVE cats?”  Very vivid, especially the feeling that the cat knew me.

Here’s the quality of help I currently have to call on in my office: 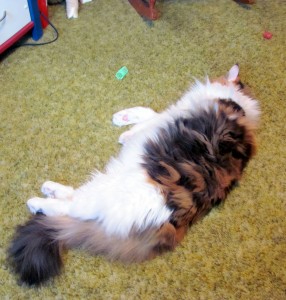