It says here that Boskone 53 will be my/our 56th science fiction convention since 1996.  It also says that we attended 17 of those soon-to-be-56 conventions as Guests of Honor or Special Guests.

I’m not sure this is completely accurate.  For instance, Steve attended some recent Boskones on his own ticket, while I stayed home to man the day-job or to care for Mozart, when he was too ill to be left with the cat sitter.

Nor did I start going to science fiction conventions in 1996.  My first convention was Balticon 10, in 1976.  Steve and I did a bunch of conventions in the late 70s and early 80s — as hucksters, as we were called then, and Steve doubling as a pro (I wasn’t even remotely a pro until 1980, when I sold my first story to Amazing).  That was before we moved to Maine and gafiated for a few years.  Sadly, I threw away all those convention badges long ago in a Fit of Despond, and, yanno, back then — why would I even keep records of what conventions we attended? So the Real Record is, I suppose, Lost to the Ages.

Here’s something a little different — a galactic ice castle, courtesy of the Hubble Space Telescope: 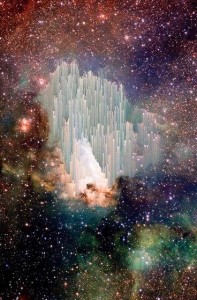 6 thoughts on “Speaking of Conventions…”