I hear you over there, “What in ghod’s name has the woman been doing?”

Answer is that I’ve been working — there’s been an…development in re the current project.  But, yanno, it’s a good development!  You’ll like it.  No, really.  It just means that the delivery date’s been put back a smidge.

Also, I’ve been on hold a lot because —

The health insurance company, which last year let it be known that it was going to be serving out Tier One meds for no cost, if  (IF) you moved your business to a handful of approved pharmacies, and then decided that the cost/benefit thing didn’t work (they’re a non-profit, so even though they sent a letter to their membership indicating that it was not profitable for them to continue the program, I’m told I shouldn’t say “didn’t make a profit.”  So, that.), and then got pissy when everyone who had somehow imagined that this was going to be an on-going thing (I went to the damned orientation session.  The words “pilot program,” “experiment,” or “so we can see what happens” were never uttered in my presence.), got corked off at them?

The insurance company isn’t answering the phone.  Now, all I want to know is how much my meds are going to cost me this year, which the pharmacy can’t tell me, because they have to process the prescription, and every person’s price is somehow different.  But!  All those uneducated folks who are mad at the insurance company are tying up the lines, and the poor automated answering system was, as of my last attempt to call, yesterday, just about to lose its tiny mind.

What else?  Oh!  Today was the first day of Tai-Chi at the YMCA.  Steve and I went together, to find that there are only four of us in the class, which needs six to continue, so if you’re within the sound of my voice — or, more pertinently, within reasonable distance of the Alfond Center/YMCA/Boys & Girls Club on North Street in Waterville — and you’re free on Wednesday mornings from 9-10, the Tai-Chi class could really use you — and you could really use the Tai Chi class.

Anyhow, the four of us and the instructor did the first class, and when it was over, Steve was for going up to Anytime Fitness to do his usual Wednesday thing there, and I — heard the sound of ping-pong being played, with vigor, right down that hall there, and having once been an avid ping-pong player of little to no note, I wandered down to have a look.

What I found wasn’t ping-pong.

What I found was?

Pickleball, for those who have never heard of it (like me, before this morning) is the unholy child of ping-pong, badminton, and tennis.  Played with a wiffle ball.  There was a roomful of people having at it, and they all looked like they were having so much fun.  And badminton, which I also used to play and enjoy, has long been denied me — long story short, I went out to the desk to find out how I could participate.

And the news from the receptionist was:  “Give me three small ones, take yourself down the hall, sign up on the game sheet, and wait ’til a court clears.  There are extra paddles in the room.”

Ohmighod, I had so much fun!  I can’t remember the last time I had so much fun for three bucks.  The rules are a little Calvinballish, so I was happy to be taken in hand by Mike, who showed me the rudiments, and good-naturedly partnered me through two learning games — we lost both, but we lost the second game much closer than the first!

It turns out that there’s pickup pickleball every M/W/F from 9-11, and all you need to do to play is show up, fork over with the three small, and go put your name down on the sheet.

Not only is pickleball fun of itself, but I (1) wasn’t the oldest person on the court, (2) nobody felt like I was picking on them if I managed to return and/or volley, and (3) everybody was delighted to have someone new wander in.

The last time I tried to play badminton was at Colby, where a group of students had arranged for a time for pick-up badminton, all invited.  But it turned out that “all invited” did not mean middle-aged secretaries.  They were very nice about letting me play the first time, then moved the session time to an hour when I wasn’t on campus.  Ah.  Well, then.

But!  Let us not repine nor be made gloomy by the past.  Let us look to the future, where —

I believe I shall play pickleball again, on Friday.

In case you’ve never heard of pickleball, here’s a video.

For the Facebook peeps (and for you, too; I don’t mean to exclude anyone), here’s a picture of Belle, who does not believe that she will be playing pickleball, thanks. 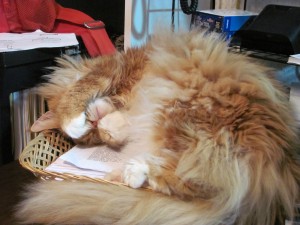