Today was vacuum the house day, and make lentil stew for lunch day.  Since I’m a linear girl, I was going to vacuum first, then make stew.

That plan got kicked out when Dyson (the vacuum cleaner is a Dyson, name changed from The New Vacuum a couple years ago when I realized that we’d purchased it with royalty money from Meisha Merlin, which has been closed for eight years). . .when Dyson screamed a mighty scream, which usually means that a string has gotten ’round the rollerbar, or cat fur. . .

Well, it was cat fur — about a coon cat’s worth of cat fur — and it looked for a while there that the cats’ clever plan to murder the cat-eating machine had borne fruit, because I couldn’t even get the face-plate off to begin to deal with the problem.

Steve saved the day, with Trooper and Sprite close at hand, to observe the process.

I fear they may have a upgraded murder plan in the works.

While Steve was working on Dyson, I started the lentil stew, and observed progress on The Leeewit, which I had resurrected in order to try my hand at Linux one! more! time!

. . .this may require some background.

See, like Everyone Else on PC World, I have been being badgered by Microsoft for months and months, to take my “free” upgrade to Windows 10 (I run Windows 7).  In addition to being a Linear Girl, I am a Girl Who Does Not Like to Fix What Ain’t Broke, and I have been ignoring these importunate messages.

However, it seems that Microsoft will eventually just be pushing 10 down as an “upgrade,” which is horrifying beyond belief.  The desktop is my work machine. And though it is backed up, my life is on this machine.  I cannot risk losing anything.

So, I figured that I would install Windows 10 on Number 10 Ox, the Acer laptop, also running Windows 7 Pro, and Pay Attention.

The installation went smoothly, though it was slow (by today’s standards; I’m old enough to remember having to pretty much block out a day to sit in front of the computer and swap out a quarter-zillion disks-then-a slightly lesser number of CDs), but it was after the install that the fun began.

That was when I tried to find and turn off all of the spyware and “helpful” options in the “free” software.  Stuff like — if a computer on the internet is updating to Windows 10 and your computer happens to be on the internet, too, it may be pressed into server duty, in order to serve software to this other computer.  And — oooooh, keystroke logger! and we’ll helpfully send those keystrokes to Microsoft, so your computing experience can be “fine-tuned”.  Dude!  I work on this machine, and the internet is more often on than not.  Are you really going to be pushing ads for the Quality Inn Solcintra to my computer?

Long story short, the experience left me wanting to never do it again.  Apple is too expensive for me, and subject to its own slings, if not outright arrows, so the obvious answer is — Linux.

Long-time readers of Eagles Over the Kennebec, will recall that I at one point had a Linux box.  There was an uneasy peace between us, and occasional flashes of real affection, but we never loved each other.  And eventually, I went back to Windows, as being easier on my brain.

I am told that nowadays Linux Mint is Doing The Thing Right, so I pulled the Leeewit, the by-today’s-standards-ancient Asus eeePC, out of the closet and downloaded the newest Mint (which for some reason is called Cinnamon) to it.  Then, of course I couldn’t install it, because even the best software can’t wipe the drive it’s living on, then install itself.  Duh.

Steve once again came to the rescue, downloading the OS to a stick.  We then had to go ’round the barn three times in order to convince Leeewit to actually boot from the stick, but we got there eventually, and as I type, I have a functioning 32-bit Atom-powered netbook running a full edition of Mint Cinnamon (Rosa) 17.3.  LibreOffice comes with, so I’m ready to rumble, and?

Somewhere around all those adventures, lunch was served and eaten, and vacuuming was done.

Let it be said upfront that Trooper is Not Dyson’s Biggest Fan.  When the machine roars to life, he immediately runs to my office (my office being, despite innumerable demonstrations to the contrary) considered by catkind to be Safe.  Sprite makes right for the basement, and Scrabble — poor Scrabble — freezes on top of the file cabinet in Steve’s office, and (unless I want a drooling, shivering basket case on my hands, which I don’t) must be picked up and brought to the basement stairs.  When you put her down, she wails piteously, runs down to the bottom of the steps, and gazes up at you, still wailing, until you close the door and get on with things.

Today, however, when I escorted Scrabble to the stairs, and she descended, crying — Today, Trooper came out of my office, and went downstairs, pausing a few steps above her, and spoke to her in his mid-range, not-squeaky voice — and here’s the amazing part — Scrabble not only didn’t lay into him with ears back and claws extended, she actually stopped crying, and accepted a head-butt.

I also learned today that Belle?  Can levitate.

I thought she’d gone downstairs, like the practical mom-cat she is.  I thought wrong.  She had retired into the basement of the Cat Castle; all the way in the back corner of the basement, where she was apparently determined to wait it out.

Then the vacuum entered the living room, approaching the Cat Castle, and — she lost her nerve.

Remember that I thought she’d gone downstairs, and thus was completely taken by surprise by the Very Large Orange Feline bursting out of the basement and into the air.  I swear she was heading directly for my head, did a mid-flight adjustment, landed on the far side of the Mencken table, and bolted for — downstairs?

And Belle has a new nickname to go along with “Mom.”

Time for me to get to work.

Here, have a picture of Trooper, bird-watching. 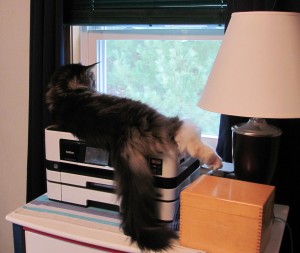