Slept in this morning, and when I got up to pour coffee, Steve still lingered abed.  When I came into the kitchen, I noticed that Trooper and Sprite were crouching on the straw doormat by the front door, both of them intently focused on the door to the coat closet.

Sprite stood up when she saw me, made firm eye contact, and stepped over to the closet door, placing her nose against it.  She then made eye contact again, to see if I’d Gotten It.

“There’s a mouse in the coat closet.” I called the happy news up the hall.

“How do you know?”  Steve asked, reasonably enough.

I poured coffee, and Steve girded himself for a mouse-hunt.  He was first-in, with a plastic butter tub in hand, a cardboard box and a piece of stiff paper close at hand.  I was backup, armed with a broom.  Trooper and Sprite flanked Steve as he opened the closet, carefully…

No mouse bounded out.

Both of the extra cat scratchers.

The canvas bag with my gardening hand tools and gloves.

Crouching against the wall was the mouse, doing the frozen thing that they do.

Whap!  The butter dish came down over him.

Steve withdrew the entire mousetrap, I opened doors, and the mouse was escorted out of the house to the edge of the home woods, where he was released to run free.

“That was really quick,” I said when Steve got back into the house.

“I think he’d gotten in the bird seed and was too gorged to move,” he said, and went to wash his hands, while I swept out the closet, and Sprite knocked over my gardening bag and pulled out all the stuff.  Just In Case.

After I’d swept, Trooper and Sprite did a formal inspection of the premises, then withdrew to perform Comprehensive Baths in their favorite morning napping spots.

Why, yes, my cats are brilliant.  Sprite’s such a communicator, I’m tempted to send her to college. 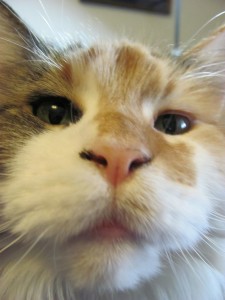