So, we went to Saratoga Springs, New York, site of this year’s World Fantasy Convention.  Editors were met with, colleagues were plotted with, research was done, the art show was viewed — and praised, lavishly, which it richly deserved.

I’m not going to name all the folks we saw, because inevitably I will forget someone (by reason of having a lousy memory, not because someone is at all forgettable) and hurt feelings will ensue.

Let all feelings be merry and bright.  I was very happy to see all of you!  Yes!  Even you.

How did we celebrate our anniversary, you ask?  Well…I don’t know if you’ve ever been in Saratoga Springs, but it is an extremely walkable little city, and the weather was our friend.  On Friday, the high temperature was 72F/22C, a little breezy, a little cloudy — absolutely perfect for walking around town, exploring/shopping/and just in general being tourists.

We went first to Northshire Books, where we had signed Dragon in Exile, back in June.  It’s a marvelous bookstore, but we hadn’t had a chance to explore it as it deserved, then.  This time, we made up for it.

After we had, ahem, completed our purchase of approximately one-half of the store, we walked down to Congress Park.  Despite the fact that the carousel was closed for the season, and the fountains drained for winter, we spent an hour-and-a-half spacing around, taking pictures, reading about the various springs, of which Saratoga Springs holds, conservatively, four billion, and just — just.  It was fun.

Here, have a picture of Pan from the Palladian Circle: 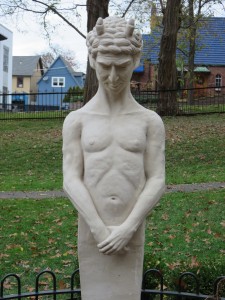 Oh!  Also a picture of Triton: 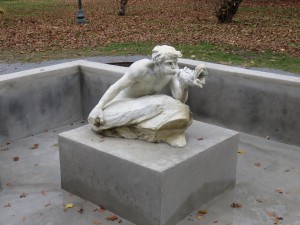 And the closed carousel: 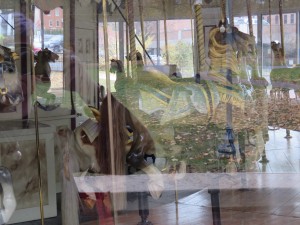 And?  A duck.  Because you can never have too many pictures of ducks. 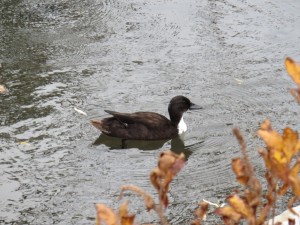 So, where was I?  Oh.  Shopping.  After we wore ourselves out on Congress Park, we crossed the street to the Visitors Center, where we Asked Questions, and were not asked to leave, though, eventually, we did leave, to find Phila Street (which really ought to be Phila Alley; it’s a thin thing, even by city standards), and thereby Ravenous Creperie, where we had a lovely lunch — Steve chose Crepes Heloise, and I chose Crepe Marsal, with tall glasses of Moroccan Mint iced tea.  Replete, we proceeded up the hill, for more shopping at G. Willikers Toy Store (where we bought a bucket of snowballs for the cats, to replace the little fuzzy balls that were destroyed through a surfeit of love), and the Saratoga Spring Olive Oil Company (where we bought three different vinegars:  the 18-year traditional, the Blackberry Ginger, and the Hojiblanca, for those Vynegreans among us.)  We visited the luthier, and a hat shop, window-shopped up and down Broadway until we were pleasantly tired, then called the hotel shuttle to come pick us up (in front of the Algonquin hotel-now-luxury-apartments), and sat on a bench, watching the world go by.

Now, all of this was very pleasant, but I’ve left out the part where dozens of strangers, most, but not all of them, women, across every age group, stopped me to say, or called out to me, or whispered in my ear as they strolled past — “I love your hair.”

Here’s a picture of my hair as seen in Saratoga Springs this weekend (with Valerie Green Schoen, also sporting purple hair): 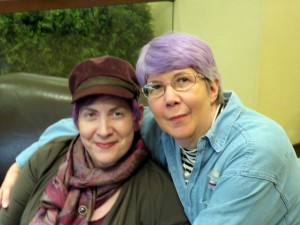 . . .Saturday morning, Steve and I went to Saratoga Spa State Park, on purpose to find the Spouter, which is probably the closest I’m ever going to be to a geyser (though the Spouter isn’t a geyser — the effervescence of the mineral-laden spring waters cause the Spouter to, err, spout; a true geyser is powered by heat.), and took a walk up the hill to the Orenda Spring.  Because of press of business, we had to be careful of our time, else we would have walked all over the park, which is gorgeous, and inviting, and…sigh.

Here’s a picture of the Spouter: 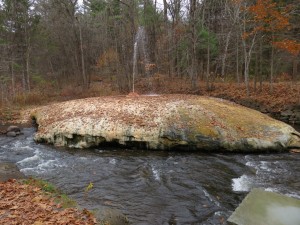 Sunday morning, we drove out and inspected Yaddo Gardens.  It being November, the fountains were dry, and the statues were under cover, but it was still an impressive place.  I want to go back in August, when the rose garden is in bloom.

Here’s the gate into the rose garden: 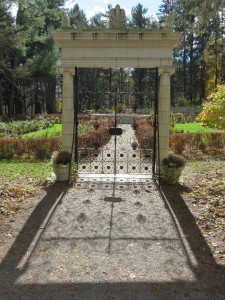 And the rose garden fountain: 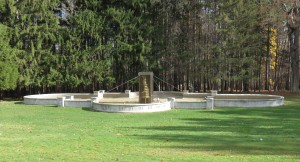 We left Saratoga Springs early Monday morning.  The original plan had been to go through Norwich, Vermont and visit the King Arthur Kitchens, but in the end, we were just too eager to get home.  We’ll do King Arthur another day.

And that?  Is how I spent my last five days.  What’ve you been doing that’s — 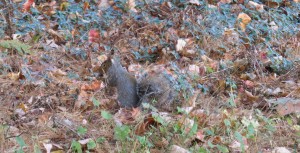 4 thoughts on “In which business goes forth, and some celebrating, too”