Today! Back to town to pick up our pre-cooked turkey breast and fixins for tomorrow’s feast, from the Deli Section. One of the things I do like about having lived in the same small town for more than 20 years, is this: The deli manager saw me shopping early last week, and made a point to come over and ask if Steve and I would be wanting Thanksgiving dinner this year, “like always.”
We also recently had an incident where we had just come into the Bank Two in order to do Normal Business.  The Head Teller waved us over to her station.
Turns out Bank Two had received a notice from Bank One that Check A had bounced. “Well!” said the Head Teller, “I know you guys never bounce checks, so I called them up and got that straightened out. It was an error on their end; your account is perfectly fine.”
Yesterday, we got news of more dental work in Steve’s future, details to be received after the upcoming holiday. Hard to believe that the Initial Journey there was more than ten years ago. Time flies when you’re having fun.
Or something.
What else?
Oh, The Gathering Edge will probably break 55,000 words today. At some point, we’re going to have to braid all of this together, but the time is not yet.  The backbone needs to be longer; right now it’s only as long as the sum of the other five threads (of which one may be sacrificed to the Gods of Plot and be used in The Next Book (aka Fourth of Five) — we shall see).
I think that’s all I’ve got.
I hope everyone who celebrates has a fine Thanksgiving, full of friends, food, and fun.
Here, have a picture of Princess Sprite’s victory sleep over her string: 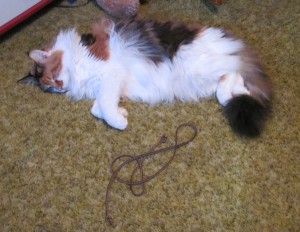