So, last night Steve and I went to the Waterville Opera House to view for our very first time, the Rocky Horror Show. This was, I’ll stress, the play, not the film.  Since we were Rocky Horror virgins — to an extent; I don’t think anyone could have existed in SF Fandom since the 1970’s and remained Entirely Ignorant of the plot.  Which actually served us well, otherwise, my enjoyment would have been. . . much less.

Since we had never seen the show before, we deliberately bought tickets to a show where the Opera House stated in its literature that props were not to be brought in.  It turns out that many of the theater-going public in Waterville cannot read, or reasoned that there are no Opera House Cops and so they could safely ignore this plea for courtesy.

Steve had the worst of it; he was sitting next to a guy who apologized ahead of time for that fact that he was going to be Very Loud in his call-backs, this despite the rules, and he proceeded to enjoy himself hugely at the expense of our being able to, oh, actually hear what was going on.  If I’d been sitting next to him, I’d’ve slugged him, reasoning that there are, after all, no Opera House Cops, and so I could do whatevertheheck I wanted to do in protection of my own experience of the play.

I’m told that we should have watched the movie first, rather than going to the play, but since we had, indeed, purchased tickets for the Rocky Virgin Show, I think we did due diligence.

In any case, because of prior exposure, I did, indeed enjoy myself, and very much pity the actors who have to put up with having things thrown at them, and call-backs and all the other. . .stupidities we observed (yes, yes, I know it’s “fun”; I’m an old fuddy-duddy, is all).  Had I known that the no-props rule would be so completely violated, however, I would have stayed home.

EDITED TO ADD:  Steve reminds me that I have forgotten to report that he won a door prize at the show last night, which was sponsored in part by local radio station MIX (107.9) and adult emporium, Treasure Chest II.

Let me let Steve himself tell you about his prize basket:  So, since Rocky Horror is a Halloween thing, and 13 is a Halloween number (It is?) I think they gave away 13 prizes all together. Our little package was a purple mini-milk-crate, brimming with stuff. Whips (very vanilla whips, really)…, no chains, Motion Lotion, Swiss Navy gels, a power stroker, yes, and enough vibrating power to open a paint-mixing shop. But you know how it is — we really were front row center in the balcony … I left the lid on the treasure chest we won and didn;t do more than peek at it. The next closest winner appeared to have a glow-in-the-dark rendintion of Dr. Frankenfurter’s equipment, which she de-packaged and handed around to be handled by her friends …

Someone over on LiveJournal (my blog posts first on Blog Without a Name on sharonleewriter.com and is mirrored at Eagles Over the Kennebec on LiveJournal) wanted to know The Rest of The Story, after we had moved to Maine and found all of our arrangements in shambles (for those who missed that post, here’s your link).

The answer to that is. . .there was a Period of Confusion, in which we learned a lot in a very short time, and were helped out by some kind people.

First off, we pulled into the now-disappeared (there’s a Wal*Mart on the site) Skowhegan Motor Lodge, where we rented a cabin for us and three cats.  We unloaded the rental truck into a storage unit (happily, we had only just been managers of a storage unit facility, so had some expertise in packing the space efficiently), and returned it (the truck, not the storage unit) to Augusta, which was much further away than we had imagined.  When we returned to the Motor Lodge, the live-in managers told us that they were starting to shut down for the winter — which meant putting each cabin into mothballs, draining the pipes, and whatnot — but that they would leave our cabin ’til last, to give us time to regroup.

This was fortunate, because I was nursing the Cold From Hell, and probably should have — in retrospect — gone to the hospital, but — we had no money.  We also walked All Over Skowhegan, Maine, looking for a place to live, and, as a by-product of that, introducing ourselves to the neighbors.  It turned out that somebody knew somebody else, who knew that the accountant had just finished renovating a farmhouse-and-attached-barn (called in Maine, “a regular house”) on Busy Route 2 into teensy, tiny little apartments, like Mainers like to do, and we went and talked to him, and we were personable and “older” (i.e. not 18), and so we found an apartment.  Then Steve got a job at the local Cumberland Farms Store on the midnight shift, and somebody else had heard about a temp opening in the Number Two Paper Machine for day-work, and I got hired on there.  And then the revisions came in for Carpe Diem, and a guy I had worked with at a game company in Maryland, who had moved on to a start-up in New Hampshire, remembered that I had been a science fiction writer, and we got a gig writing a narrative for a computer game, and eventually — I don’t quite remember how — I got a job as a clerk at the daily newspaper in Waterville, and we eventually rented a house just a couple blocks away from that job, so I didn’t have to drive 20 miles after midnight in the treacherous Maine winter, Steve got a job as the children’s librarian at the Oakland Library, Del Rey turned down our option novel, we taught writing by mail with the British-American School of Writing. . .

As it still is.

Today!  Bread is rising.  I need to get with the manuscript and do some serious work, having goofed off so well these last couple days, and!

Here’s a picture from this morning (a repeat for the FB peeps, but still better than big G+ graphic):  Trooper and Sprite having a Saturday morning cuddle in the comfy, unmade bed: 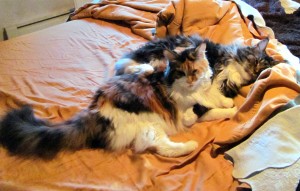