So, yesterday was a wash.  Woke up with a headache, and decided that I’d take two aspirin and soldier on.  Turns out that the headache was tougher than that, and! tougher than everything else in hand, so — long story short — I didn’t dare go in to the manuscript, because my brain actually hurt.  I took a nap, did some lightweight research, and sorted out some stuff I’d been meaning to get out of the recipe file.  Then I went to bed early, weighted down with coon cats.  Not my most productive day ever.

While I was napping the Guy from Dead River — which is not the title of a novel by Edna Ferber, though it ought to be — came by to scope out the placement of the propane tanks while will provide juice to our generator when it is installed.

Now. . .we call this the House of Negative Feng Shui for a reason.  The people who built the place had a Positive Genius for Wrong Placement.  The living room and kitchen are placed so that they will catch the full fury (insomuch as Maine has such fury) of the summer sunshine, and! most of the snow winds.  This means that the front of the house (pre-roofed-deck, thank you, Todd) was a broiler in the summer, with the added bonus of not being to get out the kitchen (main) door in the winter, because the wind dumps All The Snow exactly in front of the door.

“Gonna have to do a lot of trenching,” said The Guy.

On the other hand, he didn’t say that it couldn’t be done.

Though he did say that he needed to talk to his boss.

In other news, frequent auditors of this journal will recall that Belle had been limping off her right leg, and we took her into the vets a few weeks ago to be sure she hadn’t sprained or broken a paw/leg.  At that point, the vet found no indication of a break, but suspected soft tissue trauma.  She prescribed three days of pain killers, and warned us that soft tissue injuries take a Very Long Time to heal.

The limp hasn’t slowed Belle down; and, if it’s gotten no better; it hasn’t seemed to get any worse.  So, we decided to Be Aware, but not panic.

Fast forward to Monday, when I was grooming the cats.  I took hold of Belle’s right leg, stretched it out along my arm, and pressed her foot pad to shoot her claws.  I cut the first claw on the right foot — and when I moved on to the second claw, Belle let out a scream, and jerked forward, as if she was going to bite me — and then dropped back, looking Very Embarrassed, indeed, while being Not At All Interested in having me touch her paw again.

“I think I found the problem,” I told Steve, after we’d all gotten settled down.

“Right,” he said, and phoned the vet for an appointment.

Which was for today, at 8:30 am.  A thorough exam was made, including x-rays of both feet, and — diagnosis still inconclusive.  There does seem to be tenderness in the right foot, but no evidence of infection, or of a break. We have glucosamine to put in her food, to see if that helps with the situation.

Belle rode to and from the vet on my lap, wearing the Royal Ruff, which is Standard Traveling Livery for all the coon cats here at the Cat Farm.  None of them cares to travel in the palanquin, so they’ve learned to tolerate a small dog harness with a clip-on leash, and the ruff.  Both Trooper and Sprite drool in the car — less on my lap than in the carrier — and the ruff helps them preserve their dignity, not to mention keeping most of the cat spit off my hands.  Belle is a neater traveler, but this was her first time on my lap, and we wanted to be sure.

She did fine on the ride to and from, and at the vet’s, and is now sleeping the sleep of the Justly Exhausted on the copilot’s chair in my room.

Now, it’s time to get to work.

Here’s a picture of Sprite, wearing the Royal Ruff: 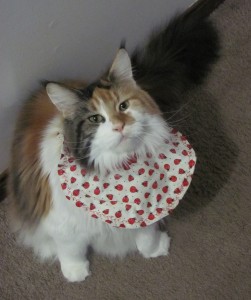