As some of you may know, I have long, on-going (unrequited) love affair with the Maine resort town Old Orchard Beach.  So great was my love that, against the advice of Practically Everybody, I wrote three books (Carousel Tides, Carousel Sun, Carousel Seas) set in a just-slightly-different Maine resort town — Archers Beach.  The major differences between the two towns, besides some liberties taken with the coastal geography, and a very little smudging along the edges of history — one of the differences is that, in Archers Beach, magic works.

And for others, who may not be, precisely, people.

The other difference is that, in Archers Beach, things are starting to turn around for the town, as the residents find renewed hope, and the energy to take up their destiny.

In Old Orchard Beach, over the years of our relationship, hope had been lost, and the residents had stopped believing in destiny.  I say this with love, and also with the understanding that love does not blind us to the loved one’s faults.

An example. . .One of the centerpieces of the Carousel books is — surprise! — a carousel.  An old, hand-carved wooden carousel populated, granted, by some Very Odd animals, but, yes a carousel.  A carousel, in fact, that had been modeled (in the author’s head) on the P(hiladelphia) T(obaggon) C(ompany) (#19, I do believe) that had been in place the very first time Steve and I visited Old Orchard Beach, many years ago.

The machine was in need of some upkeep, but old wooden carousels are expensive to keep up, and the sea air is kind to no machinery built by man.  But, it was running, the band organ was playing, and — oh, it was grand.

The next time Steve and I got down to Old Orchard Beach, maybe a decade after that first visit (stone broke, no gas money, you know the drill), we found a changed scene.  The PTC machine was gone, and in its place was a fiberglass carousel, not as old, obviously, and. . . not very well kept.  You could see the poles shudder when the flying animals went up and down; you could hear the cranks grate.  Worse, oh, far worse!  The band organ, which had been ragged, but working, had been left too long unprotected in the seaside environment.  It was mildewed, it was cracked, it was peeling. . .it was. . .heartbreaking.

Now, the carousel in Old Orchard Beach — the Chance Menagerie Carousel, is its name — is part of an amusement park.  And, well. . .let’s just say that, as went the carousel, so went the amusement park.  It was a sad, sad place, the last time I had been there at length, in 2012.  It needed — oh, paint! and maintenance, and. . .hope.

Now. . .back in 2010, right around Halloween, Jeanne Bartolomeo, who at that time owned an art gallery in Old Orchard Beach called Beggars Ride, kindly put together a launch party in the gallery, for Carousel Tides. One of the surprising number of people who attended that party came up to me, excited by the town and the book, which she had already read as an ebook, and said, “I want to see it!”

“The carousel!  I’ve already been to Bob’s and the Pier, Tony Lee’s and I have to see the carousel!”

Oh.  I cleared my throat.

She stared at me, and I could see the betrayal creep into her eyes.

In the same way, I made up the. . .revival of Archers Beach.

See, this year, Steve and I are doing a weird little split vacation at the ocean.  He and I were down at Old Orchard Beach together Thursday afternoon and evening; I came home to be with the cats, and Steve is doing a bachelor weekend at the ocean.  Monday, we’ll swap places; he’ll come down on Thursday, and Friday we’ll shift all of us back home.  The reason Thursday is important in this is that there are fireworks on the beach every Thursday night during Season, courtesy of the amusement park.

So, anyway, we went to see the fireworks Thursday night, and after that, we wandered ’round the corner to look at the carousel. . .

. . .which has been completely revamped.  The panels were new; the rounding boards were new; the mirrors shone!  The sweeps were lit, and not only that! The lifting poles no longer shuddered; the cranks moved with quiet authority, and!

The band organ had been. . .restored.

And it was playing music. 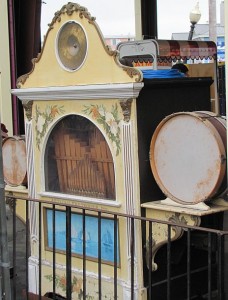 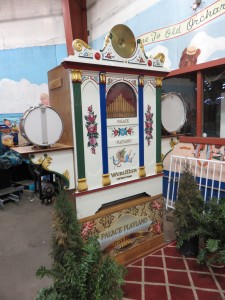 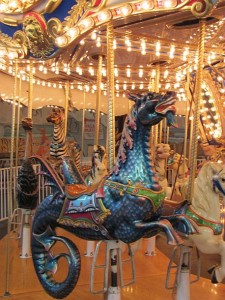 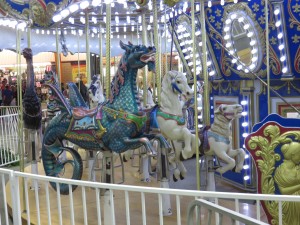 We walked through the whole park, and we noticed new paint, and bright new lights, and a feeling of hope amid the crowd.

When we came to the arcade, I said to Steve, “I want to visit Grandma.”  I always visit Grandma when I’m in Old Orchard Beach.  If I have a quarter, I’ll pay her to read my fortune.

Now, since Forever, Grandma has been shoved in a dark corner next to a service door in the arcade.  I walked right to the place, only to discover that!

I turned around, found Steve some distance behind, shaking his head and pointing.

They’d moved Grandma out into the main corridor.  They’d cleaned off her case, and they’d fixed the light.  Someone had.  I saw this because there seems to be an. . .addition to Grandma’s bracelet.  A charm with names on them.  Steve and I are in disagreement.  I say the charm is new; a marker from the people who paid for her restoration.  Steve says there was always a charm.  I don’t have a picture after, but here she is, last time I saw her: 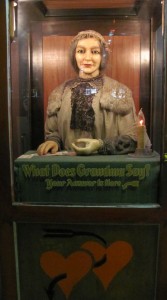 And so that’s it.

Who says there’s no magic, any more?

Today’s blog post title brought to you by Loreena McKennit, “Beneath A Phrygian Sky”.  Here’s your link.

8 thoughts on “The moonlight it was dancing on the waves, out on the sea”