I was going to write a longish blog entry about why there have to be Books Between, but…I’m tired, and the dishes need to be done, and after that I wanna curl up and read one of my geisha books, so…maybe later.

Today was cleaning, early, and getting bread started, and then the visitation of the Bath Guy, Stage One in our intention to remodel the bathroom, replacing the bathtub with a shower enclosure.

This consultation took much longer than I had planned on, and the execution of Stage One will be somewhat more expensive than I had anticipated — Balancing the under-budget work we had done in the fall. We signed the contract, gave a deposit and sometime in mid-June we’ll have a brand-new shower. Upon which time we will commence in saving for Stage Two.

Does it strike anyone else as Completely Unfair that the least glamorous room in the house will cost the most to redo?

Anyhow, I also finished compiling the second volume of short stories, and writing the foreword for that, so everything’s ready for an orderly transfer, just as soon as the contract’s ready.

Oh! And exciting news, for those who didn’t hear it elsewhere: We heard from David Mattingly this afternoon; he’s finished reading Necessity’s Child, and is excited about doing the cover. Can’t wait to see it!

Before I answer the siren call of the dishes, I want to assure fans of Silversocks that he’s settling in nicely. Here’s a picture Steve took of him yesterday afternoon, while he communed with a box: 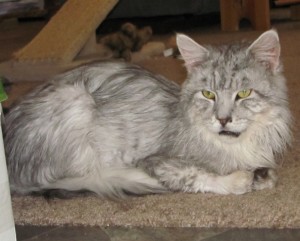