So, yesterday, Steve and I betook ourselves to Rockland, there to tour the Draken Harald Hårfagre, the world’s largest Viking ship sailing in modern times.  It says here.  In fact, the Draken is not historically accurate, by which I mean it is not a recreation of an actual Viking ship recovered from the depths or found sleeping in a bog.  It’s a Viking ship given shape by the enthusiasms of one guy, who managed to talk a bunch of other guys into Doing This Thing (history of the project here).  That said, the Draken is Awesome.

It was built traditionally, and as the crewman who led our tour describes it — the ship “swims” in the water, much like, oh, a sea serpent.  There was also a description of the effort and engineering that goes into raising the main mast and letting out the sails.  The mast weighs. . .I’ll get any number wrong, so let’s just say, A Lot.  It takes about a dozen people, working with a large screw set in the deck to raise it.  The technique is to raise it halfway, which is Hard Enough, then swing it out past the shrouds, release the sail, and then go back to the screw to bring the mast vertical to the ship.

On a previous voyage, the mast — snapped in half; one half fell into the sea; the other half to the deck, where it did not crush anyone, but did trap a crewman below-decks (he was in the head; no escape hatch in the head; they hadn’t thought they’d needed one.  “We’ve got one now,” said our guide.)

The new mast has a bit of graffiti on the base:  If found, please return to Draken Harald Hårfagre. . .

I took a couple pictures on my phone.  Steve took a whole series with his camera.  For those who can see Facebook, they’re here.

After the tour, we did the Full Tourist, buying t-shirts, a book-and-CD set. Steve bought one of Odin’s ravens; I’m not sure if he’s got Thought or Memory.  May have to ask it.

We did learn that the Draken is now charging for tours because the man who caused it to be built no longer wishes to fund the ship out of his pocket; and it must be self-sufficient.  Which means, if it comes to a port near you — please take the tour; it’s not only cool, but you’ll be keeping the Draken out of mothballs.

After the tour, we came home the long way, ate lunch and got to work. 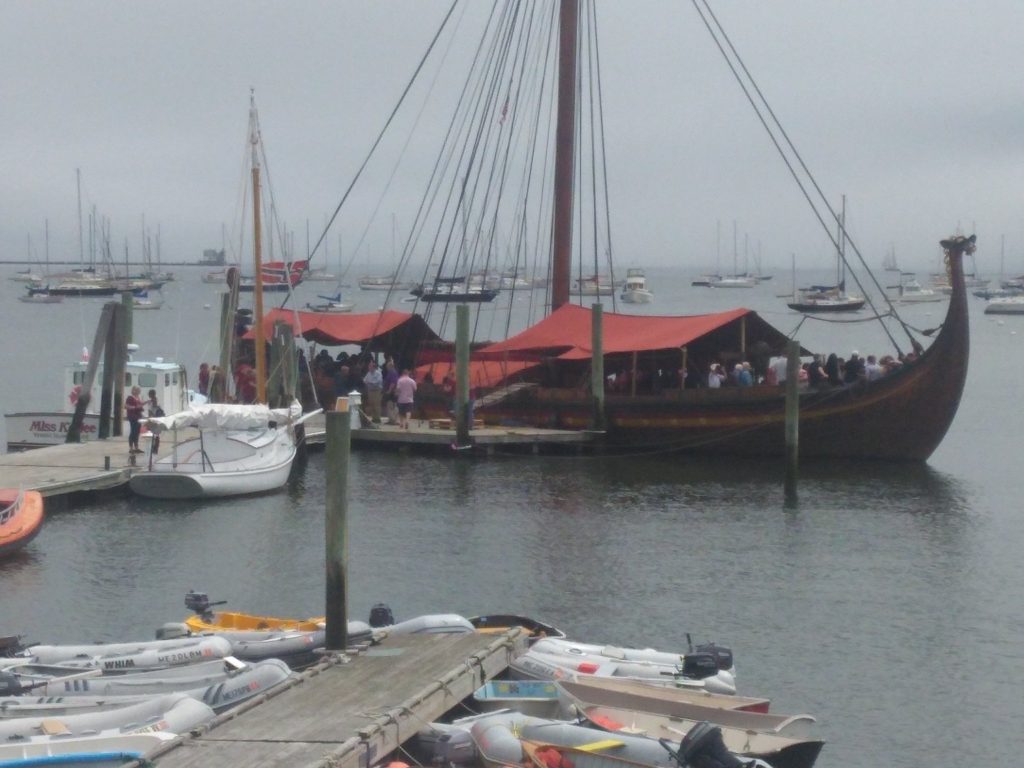 One thought on “Dragon Ship”