So, of course Monday was Belle’s birthday.  Her eighth birthday, so you see that she is, indeed, a Cat of Substance.  Festivities were scheduled, and everyone made merry, but not too merry, as it would have been a terrible thing indeed to wake the Birthday Girl.

The new remote starter has been installed in the car, and has already been useful, so that.

And!  Steve and I have discovered that Fifth of Five is rather more broken than we had thought, which would be why it just lies there, like a unrisen lump of dough, no matter how much we poke at it.  And this means that — we need to start over.  This is not a step that we take lightly, and it’s certainly not the news I wanted to take to Madame, but sometimes, there are no fixes.  So, we’re taking a small breather, and wading in again.

In other news, Maine is melting.  It was 60 degrees today, on February 21, and the streets ran with mud.  Tomorrow, it will be cooler, and again on Friday, with the difference being that Friday, it will rain.

I think winter may be over. 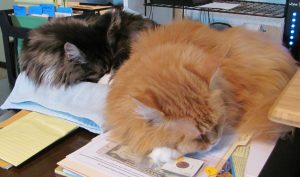 6 thoughts on “Mother told me, yes, she told me, I’d meet girls like you”