Yesterday, we had precipitation.  There was some confusion amongst the Weatherbeans in their lofty towers of ice and sunshine regarding the form in which the precipitation would finally manifest.  The Weather Wheel spun from snow, to sleet, to freezing rain, ice pellets, and the ever-popular wintry mix, until the Weatherbeans in their wise frustration threw their hands in the air and said, “It is on the back of the wind.”

And so it was.

We here at the Cat Farm were blessed with snow.  Quite a lot of snow, very wet and heavy, since the temperatures never really got much below 31F/0C.  I had tried to do the Wise Thing and perform preliminary snow removal yesterday evening, before the skylight absolutely went.  This resulted in me sliding on the ice beneath the snow and falling flat on my face.  I therefore rethought the situation, with Steve’s pointed input, and decided to do snow removal this morning, when there was more traction between boot soles and ice.

Today, it’s quite pretty out, with sticky snow stuck to all the tree branches and Everything Else, and the sun beaming down from a blue and cloudless sky.

I have done two rounds of snow relocation, in prep for the plowguy.  The first round was Before Coffee, to clear the steps and make a path in the direction of the cars.  I came in to warm up — actually, to cool down; it gets hot when you shovel snow under the smiling sun — had a cup of chocolate coffee that Steve had ready for me, and an oatmeal cookie.

Round Two saw the cars cleared, for values of clear meaning that the driver can see out the front and back windows, after which I had Second Breakfast: coffee, cottage cheese, and leftover stuffing.  The breakfast of champions.

We are now on Plowguy Watch, and my jeans are in the dryer.

For those who may have never done snow relocation on a bright and sunny day in Maine, a few notes.

The snow was so white and reflective under the sun that the only way I could find and follow the paths I had made was to look for the blue inside the outline of my footprints.  I have a great fondness for blue snow, which I don’t think I ever saw before we came to Maine.

Also, the trees are, as stated above, bearing a significant burden of snow on each and all of their branches.  Yes, the smiling sun and the playful breeze are assisting in the removal of this burden, but it’s a tricky process.

While I was outside on Round Two, the neighbor across the road lost a branch from the tree closest to his house.  I heard a crrraaackkk and looked up in time to see the branch tumbling down in slo-mo, and a cloud of snow-dust dancing and twinkling against the perfect blue sky.

This is the time when we are at risk for losing power, because the lines are every bit as coated as the trees, and subject to the same forces.  And once again, we are grateful for the generator.

For the moment, my snow worship is done.  Sprite is already asleep in her basket on my desk, and I guess I’ll take her hint and get to work.

Everybody have a safe, pleasant day. 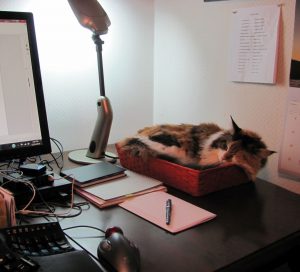