So, most of you won’t know — or care — that the World Science Fiction Society, which administers the Hugo Awards, decided at the business meetings in Seattle and KC (which all WorldCon members may attend, and may also vote on proposals) that they’d give a Hugo for Best Series (written) a whirl and see what happens.

For those who haven’t already run away screaming, here’s the nut of the definition, from the WFCS:

An eligible work for this special award is a multi-volume science fiction or fantasy story, unified by elements such as plot, characters, setting, and presentation, which has appeared in at least three volumes consisting of a total of at least 240,000 words by the close of the calendar year 2016, at least one volume of which was published in 2016.

There’s never been a Hugo for Best Series, which might strike some as odd, seeing as series is, and has always been, the backbone of science fiction and fantasy literature.  The thought, for many years, was that A Good Book Will Out, no matter if it was part of a series, or a standalone, and, indeed, many books which were parts of series have won the Novel Hugo (*).  In any case, the system kinda sorta worked most of the time, for most of the works involved.

Sort of like Ankh-Morpork under the Patrician’s rule, really.

However, the idea of a Series Hugo had been kicked around for a number of years, and the Collected Wisdom of the Business Meetings decided to go for it, despite the very real difficulties in administering — or even voting on — such an award.

What difficulties, you may ask?

Well, the sheer volume of works written in series is one difficulty (remembering that series are the backbone of sf/f, despite the sudden numbers of people who are now shocked, shocked! to learn that there have ever been any series books published in SF/F before, oh, last week).  For instance, here’s a list of the series which are eligible for award consideration for the 2016 Hugos.

Scary, right?  The amount of reading facing a conscientious voter is just. . .horrifying.  Nobody can read that much, even if you (as said conscientious voter) decide to “only” read the qualifying novel for each series, and allow it to be representative of the whole.

The series definition as given by the Society strongly favors trilogies.  Longer series, such as the Discworld, or, oh, the Liaden Universe® — while employing repeating characters and a consistent setting, and which, in simple numbers, far exceed a paltry 240,000 words — do not tell a single story, but many, many stories.  (To put that 240,000 words into perspective, Steve and I have published over 300,000 words of short stories just in the Liaden Universe®.)

This suggests a way to thin the herd, and make it (a little) easier for conscientious voters to actually read the field — rename the Series Hugo the Trilogy Hugo, and keep all else the same.

Of course, that puts the rest of us — and according to the File 770 list, there are many of us — kind of back out into the Outer Darkness; and I can hear the screams and the gnashing of teeth from here.

Let me say here that I applaud the effort to acknowledge the form that has been (she repeats tiresomely) the backbone of our field.  And I appreciate the work and thought that the drafting committee obviously put into the project.

But I think that, in the search for a nice, simple, compact award, much nuance has been lost, and real world complexity ignored.

How do we produce an award for long works that’s more reflective of the actual world of publishing?  Heck if I know.

One thing that I do think would help the Hugo Awards overall is One and Out.  This would allow room for more works to be considered, rather than allowing entropy to rule, as it has in the past.  I believe that there is a difficulty when the same publication can reliably win a Hugo Award for 30 years.  And there is strong evidence that the winners cannot be counted upon to recuse themselves.

This would, of course, take some of the fun out of the collection and display of multiple Hugo Nominee pins, but I’m sure another game will arise that will be just as much fun for the participants.

So. . .a rant without a solution for your Sunday morning.

Time for me to go to work. 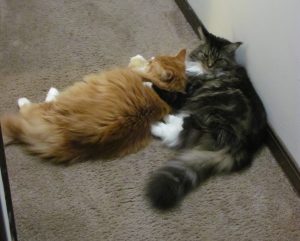 *Faulty memory department.  Thanks to Melita66 for straightening me out.