So, there’s this Thing that happens when you start to get better after having been, oh, pretty sick from the flu, say.  You start to feel better, and you say, “Hey!  I’m better!”  and then a couple weeks later, you look back at that point and say to yourself, “Oh, boy, who was I kidding?  But, hey!  I’m really better now!”  And a couple weeks further along, you look back at that point, and shake your head, because, man, you didn’t know what better even was — and so on until you stop thinking about it and eventually, you’re back to 100 percent, or whatever passes for 100 percent in your country, and life goes on.

One of the most frustrating parts of this continuing journey is the hitting a Wall of exhaustion, when, just five minutes earlier, I was feeling just fine.  Really, it’s like 80 to zero in two heartbeats, and suddenly I’m tearing up because I can’t remember how to hard boil eggs.  Disconcerting.  My particular Wall seems to manifest in the afternoon, anywhere from ten minutes to three hours after the midday meal, so, naturally I’ve been trying to cram all the Stuff I feel I need to do in the hours before the midday meal. Which may or may not be exacerbating the situation, but we play with the tiles we’ve drawn.

In any case, I am not back to a place where I can write fiction yet (argh), but I can do other writing related things, like read page proofs, which is what I’ve been doing, slowly, with the proofs for the mass market edition of Accepting the Lance, which has been its own small journey into surrealism.

It’s not that I don’t remember the story — not exactly that.  I do remember the — the hanger points, which is to say, the scenes that had to be there in order for the story to continue in a forwarder direction.  What I don’t remember are things like Val Con having lunch with his daughter, or the Miri’s meeting with the snow removal crew, or any other of a bunch of the small scenes that give the story depth and Truth.

So, I’m about 87 pages short of a complete read of the proofs, and hope to finish them tomorrow.  Then, I’ll see what other trouble I can get into — in a good way, as the journey toward normal continues.

So, let’s do a little catch-up.

1  Amazon is currently having a $.99 sale on the Kindle edition of Shout of Honor: Adventures in the Liaden Universe® Number 29, published in May 2019.  If you have an interest, or think someone you know might have an interest, here’s the link.

2  Barnburner, a cozy Maine mystery by Sharon Lee, the first of two books featuring Jen Pierce, is now available as an ebook, paper book, and audiobook.  Here’s your link.

2a  Gunshy, the second Jen Pierce novel, will be along bye-n-bye, so watch the skies.

3  The Wrong Lance, that being the start of the novel which is NOT Accepting the Lance, is being posted, a chapter a week on Mondays.  There are 11 chapters, and Chapter Six posted this morning.  If you’d like to join the fun, you can start here.

4  I will be moderating a panel at reCONvene on August 15, time to be determined.  Panelists are: Steven Barnes, Jenn Brissett, Br Guy Consolmagno SJ, Adrian Tchaikovsky. We will be taking up the topic of Earth’s place in the future; what it may mean to be “from” Earth; and what Earth itself may look like, socially, and environmentally.  More information on reCONvene may be found here.

5  Today is Princess Jasmine Sprite’s eighth birthday.  Here’s a picture of her being patient when I interrupted her morning squirrel watch: 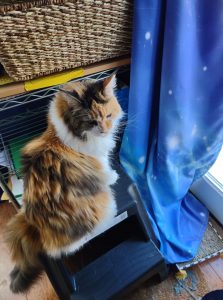 An Alert Reader lets me know that Barnburner by Sharon Lee, the first of the Jen Pierce cozy Maine Mysteries, is now an audio book! The narrator is Traci Odom, who will also voice Gunshy, due out realsoonnow.
You can buy the audio edition of Barnburner here.

Asyouknowbob, Trader’s Leap, the twenty-third novel of the Liaden Universe® written by Sharon Lee and Steve Miller, will be published by Baen Books in early December 2020.

Several people have written to us, to let us know that Barnes and Noble is sending to Known Liaden Readers with the news that they are taking pre-orders of Leap — which is pro-active, and I applaud them.

We have also been asked, in light of the fact that Uncle Hugo’s was burned in the recent riots, if there would be any chance of signed editions.

We have an answer to that question, to wit!

Yes, there is a chance of signed editions.

We have spoken to Don Blyly, the man behind the Uncle, and he wants to handle the signed copies of Trader’s Leap, as he has done for manymany of our previous novels.  He needs to get some ducks in a row, and to our knowledge, he is proceeding in that endeavor.

Now, here’s where you need to not let BN, or the Internet Timewarp, raise your expectations.  Leap is due out on December 1, 2020.  Today is June 30, 2020.  Even in a normal year, the preorders through Uncle Hugo’s wouldn’t open until September.  There is time enough in the interval to wrassle ducks into at least a semblance of propriety, and if the worst happens, and the Uncle cannot find a way to handle preorders for signed copies, there will be time enough and world to pre-order from another source.

Here, have a picture of Sprite and Belle, being calm and patient. 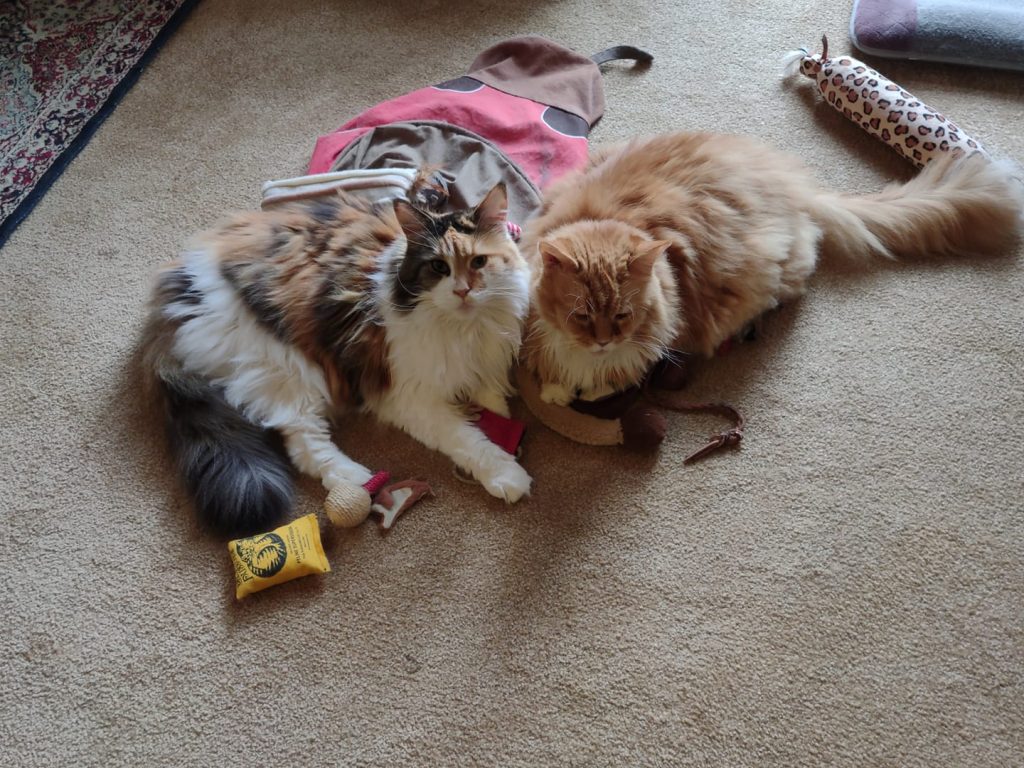 Chapter Five of The Wrong Lance is up and waiting to be read.

Today, as I am reminded by Lawrence M. Schoen, is Science Fiction and Fantasy Writers Day. I am responsible for this day* — which is, coincidentally, the day that Cyrano de Bergerac made his first flight to the moon.
The Suggested Celebration of the Day was that people would publicly recall the authors whose work had made a difference to them, and perhaps to write a thank-you note to that author.  Here’s the original post.
Gizmodo did an article about this, back in 2009. Most of the links are broken, since I no longer have a Live Journal account, and this whole scheme was thrown together there. Still, worth reading, at this link.
As the day is worth celebrating!
Share news of the holiday with your friends, and!
By all means, celebrate to the fullest.
_________
*The June 23 iteration, anyhow, since I believe there is now Another SF Writers Day created by Someone Else.