. . .they were fleeing Maine with a nor’easter nipping at their heels.

Since the Lakeshore Limited, aka Amtrak Train Number 49, leaves the Albany-Rensselaer train station at 7 pm, Steve and I decided to leave reasonably early (by which I mean, the sun was up by the time we were likewise), and take the Scenic Route.

This, we did, stopping in Keene, New Hampshire, for lunch, and wending our way gently through the warm and sunny day.  Shoppers in downtown Keene were wearing shorts and t-shirts, ignoring the predictions of Snowpocalypse for the morrow.

We arrived at the train station in time to wait two hours before boarding, and having dinner onboard (Steve had the chicken; I tried to have the butternut squash ravioli, but they were out.  Instead, they gave me (after due warning) mashed sweet potatoes formed with a melon ball and served under alfredo/spinach sauce.  It was. . .interesting.), returning to our room, and so to sleep.

Breakfast next morning was a “scrambled egg bowl,” and then we arrived at Chicago Union Station with a nine-hour layover before us, which we shall pass over lightly.

. . .until 6:30 am, when the car attendant woke us so that we could de-train at Memphis, where we were picked up by Sylvia Cox in her hat as Guest Liaison for MidSouthCon.

Sylvia was everything that was accommodating and good-natured, got us to an IHOP so we could grab breakfast, drove us up and down River Street, so we could observe the above-flood-stage Mississippi River at first hand, and so to the hotel, where there was no waiting to get into our room, despite it being Very Early in the Day.

We repaired to our room and unpacked, then it was time to meet Jane and Pat in the lobby.  Pat filled us in on the history of the Memphis neighborhoods Jane was driving us through, until we arrived at the Children’s Museum and!

The restored 1909 Dentzel Carousel which was for many years the centerpiece of Libertyland Amusement Park.

Here, have some carousel pictures: 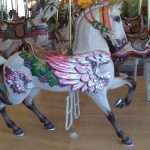 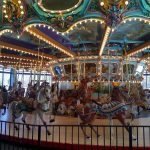 After we finished with the carousel, we invaded the Children’s Museum, which was just. . .awesome.  So much interactive stuff — including an installation that taught you how to break into a safe; a real police car, and a FedEx jet.  Things to climb on, things to climb through, an air current raceway for balls and scarves, the ever-popular Legos, a grocery store, a discussion of the US Mint and how money is made. . .

Yeah, we spent some time there.  They ought to make these things adult-sized.

We departed the Children’s Museum, reluctantly, and — because there were flowers blooming in Memphis and Maine was by that point buried under a foot of new snow — Jane and Pat took us to a Botanical Garden to admire the pansies, the tulips and the early daffodils, as well as some flowering trees.

Eventually, we came back to rest at the Hilton, had lunch, a nap, and woke in time to get ready to share the pre-convention dinner of chicken spaghetti with con volunteers and those other Guests of Honor who had arrived.  We had a lovely chat with Ellen Datlow, Editor Guest of Honor, and a changing roster of volunteers, as people broke for supper and then went back to the important business of putting the con together.

Friday was the first day of the con.  We toured the Dealers Room, and the Art Show, talked with folks we met around and about, including Glennis of the Missing Volume, and the lady who was selling kaleidoscopes, and…and…and…

Then, it was time for our first professional obligation:  Signing on Pro Row.

At 7 pm, it was time for Opening Ceremonies.  Each of the Guests of Honor were escorted to their seats by Batman or Superman.  I was escorted by Superman, while Batman did the pretty for Steve.

Each of the Guests were introduced and given a gift box full of whimsical and useful goodies.  Mike Resnick, the Toastmaster, told us a couple stories, we heard a little history of the convention, and it was official!  MidSouthCon was On!

Next morning, first thing, was the Teddy Bear Tea.  Despite the early hour, it was well-attended by a variety of plushies, who socialized with each other while their human companions told the story of each one, and did some socializing of their own.  Steve and I enjoyed ourselves, as did Lemmy, Jingles, and Hassan the Assassin.

We then had the opportunity to talk to a ballroom full of attentive people about the history and times of the Liaden Universe®, attended the Baen Traveling Roadshow, and did a panel on characterization and social world building before it was time for the banquet and the presentation of the Darrell Awards.  All the guests were brought to the front to be re-introduced to the convention, and asked to say a few words.

After the banquet, it was the Epic Women in Epic Stories panel, ably moderated by Toni Weisskopf.

Sunday morning, we hosted a breakfast in the restaurant for eight folks who had signed up to observe us before we were caffeinated.  Topics ranged from cats, to writing, to the weather, to cats, and also — cats.

After, we read Select Portions of Agent of Change — in celebration of the Thirtieth Anniversary — to a small but appreciative audience and!

All too soon, it was Closing Ceremonies, and MidSouthCon was over for another year.  Except for the Dead Dog Party, where barbecue was had by all.

Because of how the trains run, we had most of Monday in Memphis.  We used our time wisely, playing tourist, visiting the Peabody Hotel in time to do a thorough tour before taking up a position on the mezzanine to see the ducks march out of their lobby fountain, down the red carpet and into the elevator that whisked them away to their rooftop penthouse.

After the ducks, it was a stroll down Beale Street, and a dinner, before moving on to the Memphis train station to wait for our ride.

MidSouthCon was a terrific con — everyone we met was friendly and helpful, and sincerely glad that we had come to celebrate with them.

I didn’t take any pictures at the convention, but here — have some more carousel pics: 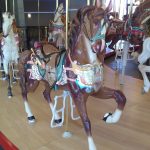 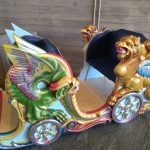 Those of you who stayed with us this far will recall that, at the beginning of the story, we were fleeing a nor’easter.  We returned home in the aftermath of a second nor’easter, which dumped eighteen-plus inches of snow on the head of most of New England.  Happily, New England knows what to do about snow, and the roads had been plowed and cleared ahead of us.  Our own plowguy had been in to shove snow out of the driveway, and clear the steps.

Today, the snow is rolling off our new metal roof, and the plowguy came by with his front-loader to push the pile of plowed snow back, so he’ll have room to put the snow from the third March snowstorm, which is predicted for early next week.

And that?  Is all I’ve got at the moment.  Glad to have gone; glad to be home.

3 thoughts on “When last we saw our Intrepid Heroes…”